The Kansas City Chiefs championship parade got off to an interesting start thanks to a car crash. A police car chase ended on the Chiefs’ parade route with several cars crashing into each other in front of fans lined up to celebrate Kansas City’s Super Bowl win.

Here is a look at the end of the chase as police spun out the vehicle then surrounded the car.

The driver and passenger are in police custody after the crash, per Fox 4. Kansas City mayor Quinton Lucas detailed the police’s efforts to stop the car from causing serious damage.

“Police used a number of tactics and maneuvers including stop sticks to stop the driver,” Lucas told Fox 4. “Police investigated the vehicle and found no weapons or any threat of danger and took the driver and passenger into custody…The entirety of the parade route was secured. I think we were incredibly ready for the situation. Crowds are now cheering officers along the way, so we have even more heroes to celebrate today.”

Despite the crash, no one appeared to be injured in the chase. Fans and players were excited to resume the Super Bowl festivities after law enforcement acted swiftly to stop the car from injuring anyone in the crowd.

Here is another look at the chase that ended in a crash.

It was not all bad news in Kansas City as fans celebrated the Chiefs’ first Super Bowl win in nearly 50 years. No championship parade would be complete without fans throwing players alcohol. A video showing Patrick Mahomes catching a beer on the parade route then chugging it went viral on social media.

It was the same kind of Mahomes’ magic that helped the Chiefs mount an epic fourth-quarter comeback against the 49ers to win the Super Bowl. The Chiefs quarterback noted the team still had faith even when they were trailing with just a few minutes remaining in the game.

“We never lost faith. That’s the biggest thing,” Mahomes told Fox, per NFL.com. “Everybody on this team, no one had their head down, and we believed in each other. That’s what we preached all year long.”

Mahomes made it to Disney World pic.twitter.com/EhvvIHlEdK

This is just the latest celebration for the Chiefs as Mahomes went to Disney World on the day after the Super Bowl. The Chiefs quarterback received the invite after winning the Super Bowl MVP award.

“I think just seeing the excitement and the joy,” Mahomes explained to ESPN. “I’ve always seen it, you always see it every single year, when the quarterbacks say it — it’s such an iconic thing. I didn’t even remember tweeting it until it came back out before the Super Bowl. For me, it was just such an iconic thing and something that was special, and I wanted to do that. And now I have and I’m here — it’s amazing.” 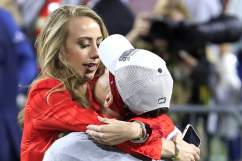