It came in a loss in a nationally televised game that would have firmed up Boston’s status as a title contender and that’s not lost on Celtics forward Jayson Tatum. After Boston fell to the Lakers in a tight game at Staples Center on Sunday, Tatum said, “I just wish we would’ve won.”

Sure, but Tatum etched his name into the annals of the most storied rivalry in basketball when he notched 41 points for the Celtics, tying a career-high. More impressive: His memorable afternoon made Tatum the youngest player, at age 21 (his 22nd birthday is in nine days), in the history of the Lakers-Celtics rivalry to score 40-plus points.

Tatum went 12-for-20 from the field and 4-for-7 from the 3-point line. He was 13-for-15 from the free-throw line, both of which were career highs. He had a look at what would have been a game-tying 3-pointer as the buzzer sounded, but he missed the shot badly, did not get it off in time and was, in the end, whistled for an offensive foul anyway.

Tatum clearly earned the respect of an old Celtics nemesis, Lakers forward LeBron James. After Tatum’s performance on Sunday, James (who had 29 points, eight rebounds, nine assists) posted a photo of himself on the sidelines next to Tatum on Instagram and wrote, “That boi to the left of me is an ABSOLUTE PROBLEM!!” 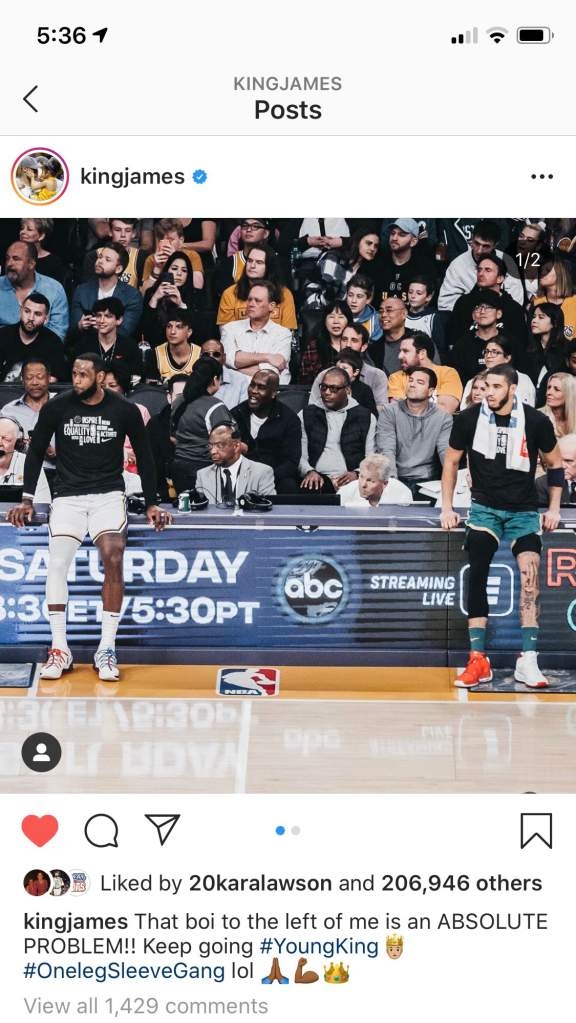 Tatum did the bulk of his damage in the middle two quarters. He scored only one point in the opening period, put up 36 points in the second and third quarters and was limited to five points in the fourth quarter.

The Lakers sent hard double-teams at Tatum for most of the fourth quarter, intent on getting the ball out of his hands. It worked. He was just 1-for-3 from the field in the final quarter.

After trailing for the entire first half, the Celtics led by as many as seven points in the third quarter but could never fully take control of the game. They led by as many as five in the fourth but the defensive focus on Tatum proved too much.

Around Tatum, the rest fo the Celtics shot just 41.3 percent from the field. Gordon Hayward was 5-for-15 on the day.

“It’s tough,” Celtics forward Hayward said, “you have those big nights, we’ve got to come through for him.”

Tatum has been getting used to big nights lately. He last scored 41 points on January 11 against New Orleans and in 16 games since, he has been a wrecking ball. Tatum has averaged 27.6 points on 49.8 percent shooting from the field in that span and 44.9 percent from the 3-point line.

It’s been a big week for him. Tatum also made his All-Star debut last Sunday in Chicago. He took the responsibility of representing the Celtics in that game seriously.

He has been great during his three seasons in the league already. Tatum arrived in Boston as a starter from the get-go and has been in the starting lineup in all 211 of his career games with the Celtics.

In fact, as league analyst Tommy Beer pointed out, Tatum will have at least 3,000 points, 1,000 rebounds and 150 made 3-pointers before he turns 22. The other three: LeBron James, Kevin Durant and Kobe Bryant. (James and Bryant, of course, had a head start, skipping college and beginning their NBA careers before Tatum.)

Jayson Tatum will celebrate his 22nd birthday in two weeks.

The other three are:
LeBron James, Kevin Durant and Kobe Bryant.

Despite the loss, it was a big night for Tatum. There are likely many more to come.

READ NEXT: Celtics, Others Wait on NBA’s Free-Agent Buyout Market