Marshawn Lynch’s status with the Seahawks remains up in the air in the early stages of the offseason. During their NFL Combine press conferences, neither Pete Carroll or John Schneider ruled out Lynch returning to the Seahawks. Schneider indicated that the team will have to see how the offseason plays out for both the Seahawks and Lynch.

“I don’t know that [Lynch’s future],” Schneider noted, per Seahawks.com. “We’ll see how the offseason goes.”

Carroll remained non-committal to Lynch returning but did not rule out another season of Beast Mode in Seattle.

Carroll was emphatic about Lynch’s impact on the team last season during his return to the Seahawks. The Seahawks coach admitted even he was surprised about how committed he was to a potential return when the team was decimated with injuries at running back.

“Marshawn made an exceptional impression coming back, starting with me,” Carroll said, per Bleacher Report. “He worked very hard to get to the point to have the chance to be available, how he got to that spot that maybe he could play later in the season. He reported in good shape. He performed well. Scored four touchdowns in the last few games. Did a great job for us just picking things up and showing how, what it takes to be available and all that. He was gracious and great to all the young guys. It didn’t matter how old you were, he was just great to everybody. I just thought he did an extraordinary job.”

Lynch provided little insight into his future plans during his final press conference of last season. Lynch’s former Seahawks teammate Michael Robinson believes that we have not seen the last of Beast Mode.

“My humble opinion, I think he wants to play, and I don’t think he’ll want to play for any other team than the Seattle Seahawks,” Robinson explained on the NBC Sports Northwest podcast Talkin’ Seahawks.

Uncertainty Surrounds the Seahawks’ Running Backs for the 2020 Season

It is not just Lynch’s future that remains uncertain, but almost the entire Seahawks running back room. Both Chris Carson and Rashaad Penny had their seasons cut short with injuries. The Seahawks have provided updates on both players’ recoveries, and it appears Carson is much closer to returning to the field than Penny. C.J. Prosise also ended the season with an injury and is an unrestricted free agent. All this means that Lynch is far from being the only Seahawks’ running back with question marks.

Regardless of their decision on Lynch, the Seahawks could look to add another running back in free agency or the NFL draft. It sounds like Lynch’s future with the team not only depends on if he wants to play, but what the Seahawks’ depth chart looks like at the end of the offseason. 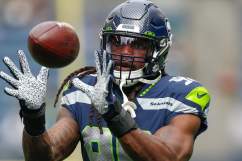