Getty Patrick Mahomes was selected in the 2014 MLB draft.

Patrick Mahomes had a potential pro baseball career laid out in front of him and MLB legend Alex Rodriguez told the future NFL quarterback to quit football. Rodriguez admitted to telling Mahomes there was “no future” in football when he was growing up, and the former slugger admits he is thankful the quarterback made other plans.

Rodriguez played with Mahomes’ dad, Pat Mahomes Sr., with the Rangers, and Mahomes used to field balls for the star hitter prior to games. When Mahomes was still playing both sports, Rodriguez offered his strong opinion on his athletic future.

“I said, ‘Now listen to me, if you don’t hear one thing that I ever tell you, you better listen to this’,” Rodriguez said, per Sporting News. “‘There is no money, there is no future, there is no history in football. You have to play baseball!'”

Mahomes did not follow Rodriguez’s advice but the Chiefs quarterback still remembers his words. Rodriguez admitted that he is glad Mahomes had a mind of his own when it came to his future.

“Well, he reminded me of that recently and, boy, am I glad he did not listen to me!” Rodriguez joked, per Sporting News.

Rodriguez was right about one thing and that is Mahomes could have had a career in baseball. It will not come as a surprise to fans of Mahomes’ signature no-look passes that his baseball position was pitcher.

Mahomes pitched a 16-strikeout no-hitter in high school and was later selected in the 37th round of the 2014 MLB draft by the Detroit Tigers. It may seem like a late-round pick, but Mahomes made it clear he was pursuing football. Mahomes would have likely gone much higher in the draft if he was open to playing baseball.

.@PatrickMahomes used to BRING IT on the mound back in the day. ? pic.twitter.com/Fr9if4r6u4

Tim Grieve scouted Mahomes for the Tigers and admitted the team knew he was unlikely to play baseball. Grieve noted to MLB.com that it was worth the risk to use a late-round pick on Mahomes given the small chance things with football did not work out. Grieve provided an overview of what made Mahomes such an intriguing prospect.

“He was the best player on the field or on the court in three different sports,” Grieve told MLB.com. “It wasn’t like you were just talking about one sport, one position. I’m pretty sure he would’ve been good at whatever he wanted to do. And you see the smile. Scouting isn’t easy. So you see a kid and you start seeing the tools come together. But it’s so easy to watch a kid play and you see he’s having fun, and above and beyond the ability. He’s got the stuff that tells you he’s going to be good. … He might have ended up being a center fielder and hitting third in your lineup. I’m not even sure pitching was the best thing he did.” 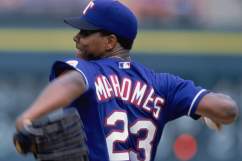