Getty Krissie Newman tweeted out a video of Ryan Newman walking out of the hospital with their two daughters.

Ryan Newman has been released from the hospital and his wife Krissie Newman tweeted out a heart-warming video of the driver walking out with their two daughters. Ryan was involved in a serious crash on the final lap of the Daytona 500 and had to be removed from his car.

“Best sight ever!!!” Krissie tweeted along with the video.

Here is a look at the video of Ryan holding the hands of his daughters as they walked out of the hospital.

Krissie also posted this photo taken while Ryan was still at the hospital. She thanked her followers for the “prayers and support” the family has received since the crash.

?? Thank you for all the prayers and support!! ?

Prior to being released from the hospital, Roush Fenway Racing provided a few positive updates on Ryan’s condition. The race team also announced that Ross Chastain will fill in for Ryan as the No. 6 driver as he continues to recover from injuries.

Ryan Newman continues to show great improvement after Monday night’s last-lap accident at Daytona International Speedway. The veteran driver is fully alert and walking around Halifax Medical Center. True to his jovial nature, he has also been joking around with staff, friends and family while spending time playing with his two daughters

Prior to the Daytona 500, Ryan & Krissie Announced They Are Amicably Separated

Less than 48 hours ago, Daytona's Halifax Medical was surrounded by media, afraid we were about to report the worst possible Ryan Newman news. Roush Fenway Racing just posted this photo of Newman walking out of that hospital to… https://t.co/3FDiafBnQZ pic.twitter.com/34xc8lDGhv

Just a few days before the Daytona 500, Ryan and Krissie released a statement announcing that they had “amicably separate[d].” Prior to the crash, Krissie noted she was watching the race when she was asked on Twitter.

“I am. Would love to see my girls in VL but always praying for a safe race,” Krissie responded.

Krissie and Ryan plan to continue their work together with Rescue Ranch, a non-profit dedicated to animal welfare.

“After 16 years of marriage, Ryan and I have decided to amicably separate,” Krissie noted in the statement. “We will continue to jointly raise our girls, while remaining friends and continuing to work together supporting Rescue Ranch. Thank you for the years of support and friendship. We ask that our daughters’ privacy be respected during this time.”

Krissie also took time to praise the medical staff at Halifax Health after Ryan was released from the hospital.

“Amazing staff and amazing people!!! Thank you is just not enough ?,” Krissie explained on Twitter.

The couple met on a blind date through a mutual friend at church in 2001 and got married in 2004, per Bleacher Report. On the track, Ross expressed his desire to make Ryan proud as he fills in for him on Sundays.

“No one could ever take the place of Ryan Newman on the track, and I can’t wait to have him back. As we continue to pray for a full and speedy recovery, I’ll do my best to make him and everyone at Roush Fenway Racing proud. #RocketMan,” Ross tweeted.

Ryan’s specific injuries have not been announced, but it is a great sign that he was walking out of the hospital under his own power. There has not been a timeline released on when fans can expect Ryan to return to the race track. 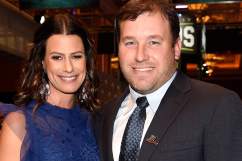