Originally drafted by the Bears with the 9th pick in the 2016 NFL Draft, Floyd has been frequently criticized for not living up to expectations harnessed to a top 10 pick in the NFL Draft. He has now been released, per NFL insider Adan Schefter.

The Bears made a huge move when they signed defensive end Robert Quinn to a 5-year, $70 million deal. Floyd’s release was announced shortly after. The team’s plans would seemingly include moving Quinn to the opposite end of the line as Mack, with a force on each side — and defensive end Akiem Hicks in the mix to boot.

Letting Floyd go gives the team an additional $13.2 million in cap space to work with, and Quinn had 11.5 sacks with the Dallas Cowboys last season, so the Bears are clearly looking to increase productivity on the defensive line. 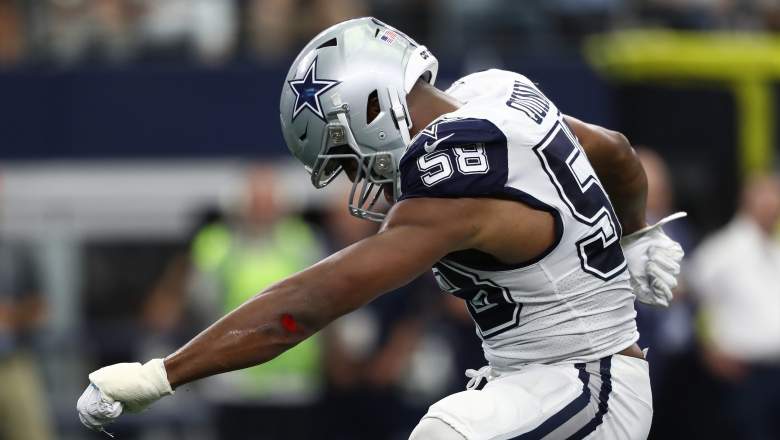 GettyRobert Quinn has just signed a 5-year deal with the Chicago Bears.

In 2019, Floyd had 26 quarterback pressures in 16 games. Quinn had 35 in 14 games. Floyd has 18.5 sacks in his four seasons, while Quinn has 80.5 in his nine years in the league. Quinn had two forced fumbles and 13 tackles for loss in 2019, while Floyd had three tackles for loss, and he neither forced nor recovered any fumbles. Quinn has also gotten to the quarterback a great deal more than Floyd. He has 145 quarterback hits in 95 games, and Floyd has 44 in 54 appearances.

Quinn has been a turnover-creating machine over the years, forcing 25 fumbles in nine seasons while also recovering two. Floyd has forced just one fumble in his four years as a Bear, and he has recovered three. Floyd has shown a certain versatility, as he has been able to drop back into coverage, playing relatively well when he did so.

The numbers show Quinn should be a huge upgrade over Floyd, although the Bears are getting older on defense with this move. Quinn turns 30 in May, and Floyd will be 28 in the fall. Still, Quinn has been a far more dominant and opportunistic player, and makes this already formidable Bears defense even more terrifying.