Getty Josh Gordon has once again been reinstated by the NFL.

Josh Gordon wants to play in the NFL next season, but the question is whether the league will reinstate the wide receiver. Gordon will attempt to be reinstated by the NFL for 2020, per ESPN’s Jeremy Fowler.

Wide receiver Josh Gordon intends to play in 2020 as he works his way back from indefinite suspension, according to a source.

Commissioner Roger Goodell will oversee Gordon’s reinstatement attempt, during which the player must prove he’s making steady progress away from the field.

If Gordon Is Reinstated by the NFL, the Wide Receiver Would Become a Free Agent

If Gordon is reinstated, the wide receiver would immediately become a free agent. The News Tribune’s Gregg Bell noted that the Seahawks would be the favorite to re-sign Gordon if he becomes eligible to play this season.

“Been asked a few times, but here again is why I think Josh Gordon will play for #Seahawks–if Roger Goodell reinstates him yet again from NFL suspension. That’s a huge IF. But Gordon seemed to have perhaps found a home in Seattle, and its locker room,” Bell tweeted.

The Seahawks were the only team to put in a waiver claim for Gordon after he was released by the Patriots in 2019. Gordon hinted at a possible return to the Seahawks when free agency began.

“This free agency stuff looks exciting. ?…Idk if I’m allowed to be a free agent, but if I was; I like those bright green uni’s. ? ?,” Gordon noted in a series of tweets.

Gordon did not have a major impact in Seattle once he arrived, but the receiver was only in the offense for a few weeks before being suspended indefinitely. Seahawks head coach Pete Carroll was complimentary of Gordon even after he was suspended.

“We saw Josh really at a really high level the whole time he was here,” Carroll explained, per ESPN. “The work ethic he brought was one, but his getting along with people and being good to work with and to talk to and all that and to deal with on a regular basis, really, he was great. So we were not aware that there was anything to be concerned about, other than the history, which we knew about.”

The Seahawks have already added a few offensive weapons this offseason with the signings of tight end Greg Olsen and wide receiver Phillip Dorsett. If Gordon is re-signed, he would likely compete with Dorsett to be the Seahawks’ third wide receiver next to Tyler Lockett and D.K. Metcalf. ESPN 710 Seattle’s Jake Heaps believes adding Gordon for the right price would only help the offense.

“I think that they’re in a really great spot to take a chance on Josh Gordon like that,” Heaps noted, per ESPN 710 Seattle. “And even before all the action that happened in terms of signing Greg Olsen and all that, all the conversation within that organization was that they really enjoyed their time with Josh Gordon in the sense of who he was every single day, the talent that he was. From my understanding, they’re going to have zero hesitation bringing him back if he’s available.” 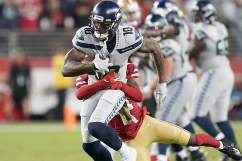