Kevin Durant is one of four Nets players to test positive for the coronavirus (COVID-19), per The Athletic’s Shams Charania. Durant tested positive despite not experiencing symptoms of the virus. The additional three Brooklyn players have not been announced.

“Everyone be careful, take care of yourself and quarantine. We’re going to get through this,” Durant told The Athletic.

While Rudy Gobert is an All-Star, Durant is the first superstar to test positive for COVID-19.

Durant Tested Positive for the Coronavirus Despite Not Feeling Any Symptoms

Unlike when Gobert was diagnosed with COVID-19, Durant does not appear to have been tested because he was showing signs of the virus. Charania detailed the process noting that Durant is “feeling fine” despite the positive test.

“Kevin Durant tested positive for coronavirus, Durant tells @TheAthleticNBA @Stadium. Durant says he is feeling fine…Durant has not had symptoms and was among four positive test results on the Nets. The two-time NBA Finals MVP’s message is one for everyone to heed: Stay quarantined,” Charania reported in a series of tweets.

Durant and his Nets teammates are part of a growing list of seven NBA players that are known to have COVID-19. The NBA has suspended play for at least the next 30 days amidst the virus.

Only 1 of the 4 Nets Players Experienced Coronavirus Symptoms

Only one of the four Nets players who tested positive for COVID-19 experienced symptoms, per ESPN’s Adrian Wojnarowski. The Nets had a private company conduct testing for the team.

“Sources: Brooklyn tested the team upon returning from San Francisco and results came back today. Nets paid out of pocket to a private company to conduct tests. One player awoke with some aches today; rest have experienced no symptoms,” Wojnarowski detailed on Twitter.

Durant Is Not Expected to Play Again This Season, Even With the Delayed Schedule

Durant has been sidelined for the entire season as he continues to recover from an Achilles injury sustained in the 2019 NBA Finals. Prior to the positive test, Durant’s agent Rich Kleiman indicated that the star forward is still unlikely to return this season, even with the NBA schedule being pushed back.

“Honestly, not very realistic from my standpoint, and not even spoken about,” Kleiman said, per ESPN. “…It feels like (Durant playing in the 2019-20 season) clearly was not something that was in the cards prior to all this,” Kleiman said. “And now, I think just like the rest of the world, it’s hard to take anything more than day by day. I think that Kevin is going to figure out the space that he needs to be in to continue to rehab during this time. But even that is hard to answer at this point, with the new kind of rules that were put in place last night.”

Durant and the additional Nets players will remain isolated to avoid spreading the virus, per Wojnarowski. The Nets have also contacted previous opponents to inform them of the positive results.

“Organization [Nets] says it’s notifying anyone who has had known contact with the players, including recent opponents. All Nets players and traveling party have been told to remain isolated,” Wojnarowski explained. 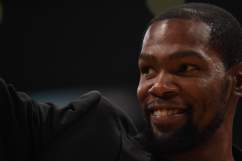