Getty The Seahawks could have interest in former Vikings defensive tackle Linval Joseph.

A string of NFL cuts took place just days before teams begin meeting with free agents, and the Seattle Seahawks could have an interest in some of the players who were released. The News Tribune’s Greg Bell expects the Seahawks to at least explore what former Vikings defensive tackle Linval Joseph will command on the open market.

Bell added that the Seahawks are “likely looking into him” but wondered if Joseph’s asking price could be more than the team is looking to spend.

“Probably [too expensive]. But #Seahawks are likely looking into him, too. They always shop–but rarely buy off the top shelf. Joseph will be at or close to that, I would think,” Bell explained on Twitter.

Joseph’s stats are not be eye-popping with three sacks and 44 tackles in 13 games last season, but the defensive tackle’s strength is being a disrupter in the middle of the line.

Joseph made two straight Pro Bowls (2017-18) during his time with the Vikings. Joseph’s salary last season was $8.9 million, and it is unclear if he will command a similar number on the open market. The Athletic’s Arif Hasan described Joseph’s fit with the Vikings.

Joseph was the first big-name free agent the Vikings signed in the Zimmer era, providing them with a stout presence at nose tackle the past six seasons who also happened to give them interior rush options — something you typically don’t see in the run-pluggers that occupy the A-gap.

The Seahawks defensive line is in flux heading into free agency. Much has been made about Jadeveon Clowney, but Jarran Reed is also a free agent. The Seahawks have indicated they would like to retain Reed, but it remains to be seen what his next contract will look like.

Joseph could be an interesting backup option if the Seahawks are not able to come to terms with Reed. The Seahawks could be able to get a discount on Reed given he is coming off a bit of a down season.

The Seahawks have made it clear that one of their top priorities of the offseason is to improve their pass rush. Players like Joseph may not seem to address that in a typical fashion, but the Seahawks have indicated that the issue goes beyond simply improving their efforts coming off the edge.

“It was hard to figure out,” Schneider noted, per Seahawks.com. “You know, we were moving the quarterback, we just weren’t necessarily—the sack numbers just weren’t there. You know, some people, some analytics people, would say sacks end drives, so sacks are important. And then some analytics guys would say, as long as you are moving the quarterback you are fine. But, we just have to play better on defense. And obviously it starts up front. There wasn’t one or two things. It was kind of like, a bunch of things.” 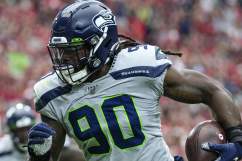