Getty The future of the 2020 March Madness tournament remains in doubt.

March Madness has been canceled along with the remaining winter and spring NCAA championships as a precaution to the Coronavirus (COVID-19). The NCAA initially announced plans to host the March Madness games without fans, but this was before the NBA suspended play after Rudy Gobert tested positive for the virus.

CBS Sports’ Dennis Dodd reported that an official announcement about the future of the NCAA tournament was not expected until Friday, March 13 but a statement was released just a day after plans were made to host games without fans.

Top NCAA officials are meeting most of the day Thursday to decide the future of the 2020 NCAA Men’s Basketball Tournament amid growing concerns over the coronavirus (COVID-19) pandemic, a high-level NCAA source told CBS Sports’ Dennis Dodd. Though a decision could be shared with the public at any point, the current expectation is that an official announcement won’t be made until Friday.

Duke released a statement suspending its athletic activities, including the men’s basketball program. Kansas, who was projected to be the top overall seed, has also suspended its athletic teams from action. Prior to the announcement, CBS Sports’ Gary Parrish explained why signs pointed to the NCAA tournament games not going on as scheduled.

“As I explained on last night’s @EyeOnCBBPodcast, once any player or staff member from one of these teams tests positive, entire teams will be quarantined, and it’s a wrap. Is it really likely that zero players on NCAA Tournament teams will test positive over the next three weeks?” Parrish tweeted.

Prior to canceling the tournament, the NCAA released a statement detailing the plans to host tournament games without fans. It is important to note that this was prior to all the major conferences canceling their postseason tournaments.

While I understand how disappointing this is for all fans of our sports, my decision is based on the current understanding of how COVID-19 is progressing in the United States. This decision is in the best interest of public health, including that of coaches, administrators, fans and, most importantly, our student-athletes. We recognize the opportunity to compete in an NCAA national championship is an experience of a lifetime for the students and their families. Today, we will move forward and conduct championships consistent with the current information and will continue to monitor and make adjustments as needed.

Fans Are Petitioning for ‘May Madness’

May Madness has been trending on social media as fans wondered if the tournament could be postponed rather than canceled. In addition to what transpires with the Coronavirus, there are logistical challenges to postponing the tournament including finding venues and the games also being closer to the NBA’s pre-draft process. The most recent NCAA statement indicates that a postponement is not in the cards for March Madness.

ESPN’s Jay Williams had been vocal in his desire for the NCAA tournament to be canceled or at least postponed.

“This is a time for everyone to be thinking about everyone else’s well being. This is not a moment for narrow self interest. It’s a time to understand that for most people, this is mostly about not getting other people sick, people who are more vulnerable than we are,” Williams tweeted.

It is important to note that every major conference tournament was canceled after the NCAA’s initial statement. As we have seen in the past 24 hours, the situation is fluid but it would be surprising if there was an NCAA tournament at this point. 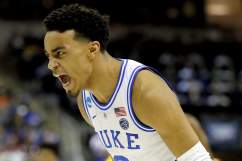