With the bulk of their free agency spending going on the defensive side of the ball after the signing of Robert Quinn, the Chicago Bears are continuing to add depth on their defensive line.

Tuesday, the Bears announced via their Twitter account that they have signed veteran defensive tackle John Jenkins to a 1-year deal. Jenkins actually spent a season with Chicago back in 2017, when he played in eight games, starting one.

DT John Jenkins is returning for a second stint with Da Bears.

The pick up of Jenkins is a nice depth-signing for the Bears. A bit of a journeyman his seven seasons in the league, Jenkins played in all 16 games for the Miami Dolphins last season, starting five. He began his career with the New Orleans Saints, who drafted him in the third round (82nd overall) of the 2013 NFL Draft. Jenkins spent his first three and a half seasons with the Saints, before being released in 2016, when the Seattle Seahawks picked him up.

He spent the following year in Chicago before heading to the Giants in 2018 and Dolphins last year.

John Jenkins: What Role Will He Have With Bears? 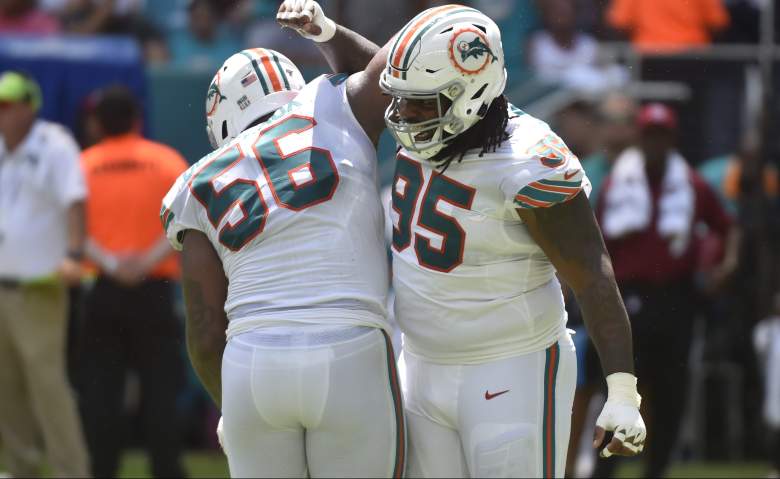 GettyMIAMI, FL – SEPTEMBER 15: Davon Godchaux #56 of the Miami Dolphins celebrates with John Jenkins #95 after sacking Tom Brady #12 of the New England Patriots(not pictured) during the second quarter of the game at Hard Rock Stadium on September 15, 2019 in Miami, Florida. (Photo by Eric Espada/Getty Images)

In his seven seasons in the league, Jenkins has played in 82 games, and has started 29. In that time, he has amassed 2.5 sacks, eight tackles for loss, a forced fumble and a fumble recovery.

He started one game and played in seven in his time with the Giants in 2018. Last season with the Dolphins, he had one of the better seasons of his career 34 tackles, one sack, two tackles for loss, and one pass defense. He was healthy all year, which is a good sign.

At 6-3, 327lb., Jenkins should compete with Brent Urban and a few other free agents for a spot to back up Bilal Nichols. The depth behind nose tackle Eddie Goldman is lacking, so don’t be surprised if Jenkins, who has played three seasons at nose tackle, could fill in a bit behind Goldman if needed. His versatility could be an asset on the line.

When the Saints drafted Jenkins in 2013, current Bears general manager Ryan Pace was Director of Player Personnel for New Orleans at the time. Pace also brought former Saint Jimmy Graham in this year, and he has shown a tendency to bring in former members of the Saints during his tenure with the Bears (see: Tracy Porter, Chase Daniel and Akiem Hicks for starters).

Many of those players have worked out, so the Bears are likely hoping Jenkins can give them a solid back up option when they need one.

READ NEXT: Analysts Have Strong Opinions About Whether or Not Bears Won Khalil Mack Trade