Tiger Woods’ girlfriend, Erica Herman, along with his two kids, Sam and Charlie, joined the golfer for a non-traditional Masters dinner. Every year before the tournament, Woods and other past green jacket winners share a Masters Champions dinner in Augusta to kick off the week.

This year’s Masters was postponed until November as a response to the coronavirus (COVID-19), so Woods got creative on how to keep the tradition going. Woods took to Instagram to post a photo of himself decked out in his green jacket joined by his family.

“Masters Champions Dinner quarantine style. Nothing better than being with family,” Woods posted on Instagram.

The Masters may not be going on this weekend as scheduled, but CBS is re-airing last year’s tournament where Woods was once again victorious. It was a special moment that the golfer also shared with his girlfriend, son and daughter at Augusta.

Woods Hugging His Son, Charlie, Had Many Fans Remembering an Earlier Masters Moment With His Dad

“I think the kids are starting to understand how much this game means to me and some of the things I’ve done in the game,” Woods said after the 2019 Masters, per Golf Channel. “If I tried to swing a club I would be on the ground and I struggled for years, and that’s basically all they remember…So, for them to see what it’s like to have their dad win a major championship, I hope that’s something they will never forget.”

Masters Champions Dinner quarantine style. Nothing better than being with family.

Woods has known Herman since she was a college student at UCF and worked at popular Orlando restaurant Blue Martini where the golfer frequented, per Page Six. Years later, Woods appointed her to manage The Woods, his upscale restaurant in Jupiter, Florida where she no longer works, per TMZ.

“She worked at Blue Martini in Orlando as a bartender to get through college,” former The Woods employee Gianni Nailor told Page Six. “And he came to the bar [as a customer].”

GettyTiger Woods with his ex-wife Elin Nordegren at a golf tournament back in 2009.

Woods’ two children came from his previous marriage to ex-wife Elin Nordegren and are splitting time with their parents during the coronavirus outbreak, per People.com. A source explained to People that Woods and Nordegren are taking COVID-19 seriously and are on the “same page” on how to parent during the trying times.

“They’re taking this seriously,” a source explained to People. “They’re totally on the same page…They’ve always been really good at communicating about things involving the kids, and this is no exception. Their number one priority is to keep the entire family safe and to help stop the spread.”

As the golfer continues to practice social distancing, Woods posted a photo of what would have been his golf bag at Augusta.

“Decided to take out the bag today in honor of Masters week. Thanks @monsterenergy for this special one. #CrushQuarantine #MonsterEnergy,” Woods posted on Instagram.

Decided to take out the bag today in honor of Masters week. Thanks @monsterenergy for this special one. #CrushQuarantine #MonsterEnergy 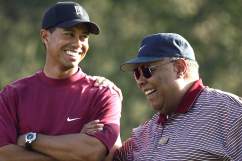