The AFC North battle for Ohio rivalry between Cincinnati Bengals and Cleveland Browns just got a little more heated thanks to some harsh words from wide receiver Tyler Boyd.

Boyd, who is entering his fifth-year in the league, responded to a graphic posted on the NFL Network’s Twitter account asking who you would wants: AJ Green and Joe Burrow or Baker Mayfield and Odell Beckham Jr. Boyd wrote an NSFW response, saying, “S—- not even close.”

Shits not even close https://t.co/phKmeamr7o

Sure, Boyd needs to back his guys, but he’s putting quite the target on the back of the Bengals new look offense, which dwelled near the bottom of the NFL in every major category. However, AJ Green is reportedly 100 percent healthy after missing all of last year and Burrow — the No. 1 overall pick — should reinvigorate and offense that flamed out under former QB Andy Dalton.

Green has reportedly been in touch with Burrow to get ready for their first season together.

“We’ve been talking back and forth. We were talking (texting?) yesterday and I know he wants to get together and throw somewhere,” Green said. “I told him wherever he is, we’ll come to him. I don’t know where, when, how. It’s all who can fly where and when. He’s the quarterback. He makes his location and we have to get there.”

After seven consecutive Pro Bowl years to open his career, Green has been banged up the past two seasons. He’s played just nine games in 2018 after missing the entire season a year ago.

Boyd has emerged as a fine option himself for the Bengals, recording back-to-back 1,000-yard seasons.

One person who would certainly dispute Boyd’s pick is Beckham, who has been rehabbing from injury.

The three-time Pro Bowl pass-catcher took to his YouTube channel to give an update on his health following offseason surgery and make a big promise about the upcoming year.

Beckham’s best season came in 2015, when he racked up 1,450 yards and 13 touchdowns with the Giants. During his first three years in the league OBJ went over 1,300 yards and double-digit touchdowns — feats he hasn’t accomplished since. 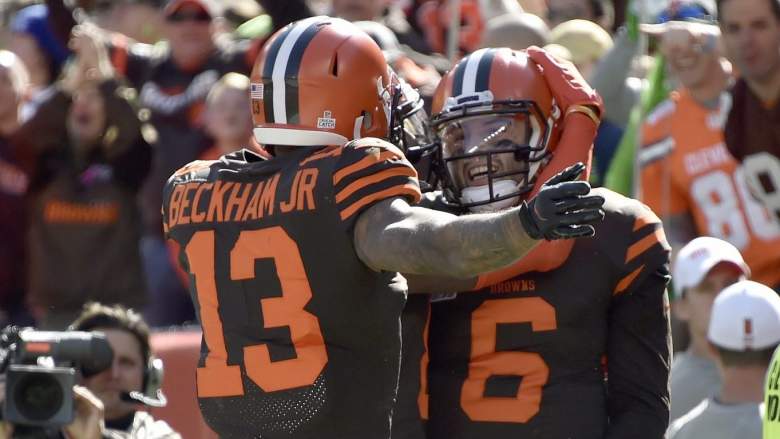 Beckham didn’t miss a game last season, but played through multiple injuries during his first season in Cleveland, most notably to his hip and groin. It was also reported that Beckham was playing through a sports hernia.

Despite breaking the 1,000-yard barrier last season, Beckham did not live up to the wild expectations set for him. He finished his first season in Cleveland with 1,035 yards and four touchdowns. However, he was basically playing from behind from the get-go due to injuries.

“So last year I was training in June and July and I was kind of just feeling stuff around groin area, abs and stuff like that and I went through training, get to August, went to training camp,” he said. “My third week of training camp I tear a little piece of my ab, so before the season, I kind of had the hernia thing going on. Sports hernia is what they call it.

“End up at the end of the season, torn abductor, torn rectus abdominis on the right, so pretty much [messed] up the whole year,” he added. “I didn’t try and say anything about it. Probably one of the worst surgeries I’ve ever had.”

Mayfield had his own problems, which was partly because of bad protection and inconsistent play-calling.

After garnering some MVP hype for his second NFL season, Mayfield finished the year with 3,827 yards, 22 touchdowns and 21 interceptions, ranking next-to-last in both passer rating (78.8) and completion percentage (59.4%) despite having both Odell Beckham and Jarvis Landry at his disposal.