The Cleveland Browns are entering yet another expectation-filled season with some major talent on the roster, but the catalyst in the equation for the team will be quarterback Baker Mayfield.

The former No. 1 overall pick is coming off a disappointing season in which the offense never truly clicked. After garnering some MVP hype in the preseason after a stellar rookie year, Mayfield finished the year with 3,827 yards, 22 touchdowns and 21 interceptions, ranking next-to-last in both passer rating (78.8) and completion percentage (59.4%) despite having both Odell Beckham and Jarvis Landry at his disposal.

Tony Gonzalez: Most Pressure in NFL on Mayfield 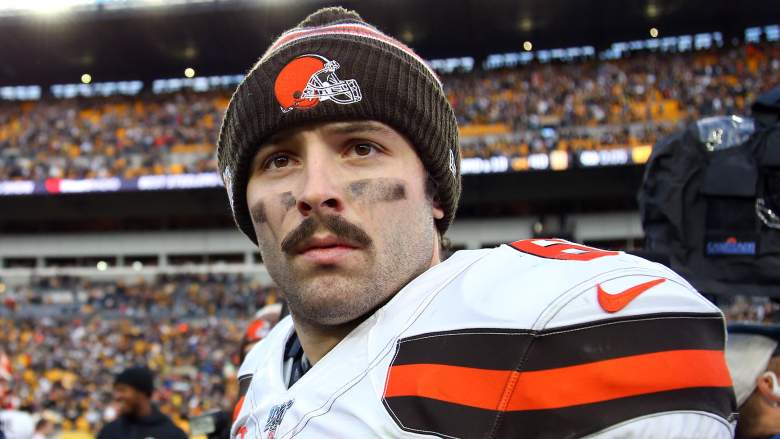 Mayfield now enters another year where all eyes will be on him, which is why Hall of Fame tight end Tony Gonzalez pointed to him as the key piece for the Browns next season.

“With all the talent they have there, this is another team where you look at the skill positions — with Odell Beckham, Jarvis Landry, Austin Hooper from the Atlanta Falcons, David Njoku. They have so many players — Kareem Hunt and Nick Chubb and a good defense,” Gonzalez said on the FOX Sports NFL show. “What it comes down to is Baker Mayfield. In my opinion right now, there is no player in the whole NFL that has as much pressure as Baker Mayfield going into this season.”

Being seeing as the savior in Cleveland comes with some pressure. The team has not made the playoffs in 17 seasons — the longest current drought in the NFL — and

“Third season, former Hesiman trophy winner — the microscope is on him. He has to deliver,” Gonzalez said. “They gave him everything. … They have done everything to give him the keys to the Ferrari. Now he’s just got to go drive it, but he’s got to learn how to get out of third or fourth gear. He’s got to take it to sixth gear this time. Looking at that roster, they are a playoff team for sure, if he can get it together and play how I think he’s capable of playing, this is a team that could challenge Baltimore for that title.”

"There is no player in the NFL that has as much pressure as Baker Mayfield going into this next season… If he can put it together, this is a team that can challenge Baltimore for that title."
– @TonyGonzalez88 pic.twitter.com/RowBPuihpy

Browns Have Faith in Baker Mayfield

During his introductory press conference, new Browns offensive coordinator Alex Van Pelt praised Mayfield for his skill set and ability, but proposed one major change he wants to make. It comes down to footwork and Van Pelt, who will also be the QB coach, said he wants Mayfield to “be like Mozart, not Metallica.”

Alex Van Pelt on the importance of footwork for QBs: "I want the feet to be like Mozart, not Metallica."

“Obviously, he has the skillset, the talent, the arm, throwing the ball on the move, to escape pressure and all of those things,” Van Pelt said, per P.J. Ziegler of FOX. “I think the future is bright.”

Despite Mayfield’s recent struggles, the new regime of head coach Kevin Stefanski and general manager Andrew Berry have remained committed to their QB.

“I can assure you there’s nobody who’s more focused and determined to put last year behind him and take a step forward than him,” Berry said on ESPN Radio’s Golic and Wingo Show (h/t cleveland.com). “We’re excited about the environment that we’ve created around that position and around that room in general, and we really do expect him to have a fantastic year. I know Kevin [Stefanski] and the staff have done a really nice job with the virtual offseason so far, implementing the new system and we think that he’ll be able to thrive in it this season.”

Read More
Cleveland Browns, Football, NFL
The Browns are entering yet another expectation-filled season with some major talent on the roster and a Hall of Famer thinks Baker Mayfield is the catalyst.