If there was any doubt Myles Garrett was an athletic freak, the Cleveland Browns star defensive end provided some additional evidence backing his incredible abilities.

Garrett took to social media to post a video of himself performing a 60-inch vertical standing jump — a simply bonkers feat for a man who tips the scaled at more than 270 pounds.

Garrett took the opportunity to petition for a role on offense, tagging QB Baker Mayfield on Twitter with the video saying, “[Baker Mayfield] I think it’s time for a MG goal line package.” It sure look like Garrett could leap right over the line of scrimmage in short-yardage spots. Or maybe the big man runs a fade to the corner of the end zone and out-jumps and bullies his way for a touchdown.

Garrett is one of the most physically gifted defenders in the NFL, and was a Defensive Player of the Year candidate before he struck Pittsburgh Steelers quarterback Mason Rudolph over the head with his own helmet, inciting chaos during the team’s Week 11 matchup. Garrett had 10 sacks before being relegated to the sideline.

Former Browns safety Damarious Randall said during the season that when he talked to Garrett, he revealed that he was keeping his body game-ready.

“He actually told me that he works out five times a day,” Randall told the Akron Beacon-Journal. “I was just messing around with him, and I was just like, ‘Hey, if they said you could come back and play this Sunday, would you be ready?’ He was like, ‘Bro, I would be more than ready.’”

Myles Garrett Has Joked About Offensive Role Before

“Still waiting on my goal line package,” Garrett wrote as the caption on a video of him playing catch with a fan. “I know y’all see the hands.”

It wouldn’t be unheard of for a defensive stud to get a few looks on offense. J.J. Watt has scored three offensive touchdowns in his career, while veteran defensive tackle Dontari Poe found himself on the other side of the ball in some unique circumstances. Poe, a two-time Pro Bowler now with the Panthers, has rushed for a pair of scores and even threw a jump-pass TD.

However, the most notable examples in NFL history of a full-time defensive player having a role on offense are Patriots linebacker Mike Vrabel and William “The Refrigerator” Perry.

From 2002-10, Vrabel recorded 10 receptions for 14 yards and 10 touchdowns. That’s quite the average the now Tennessee Titans head coach.

Perry, a defensive lineman by trade, was cemented into the lore of the league when he rushed for a short score during Super XX, looking like a runaway train. Perry’s Bears won convincingly, 46-10. 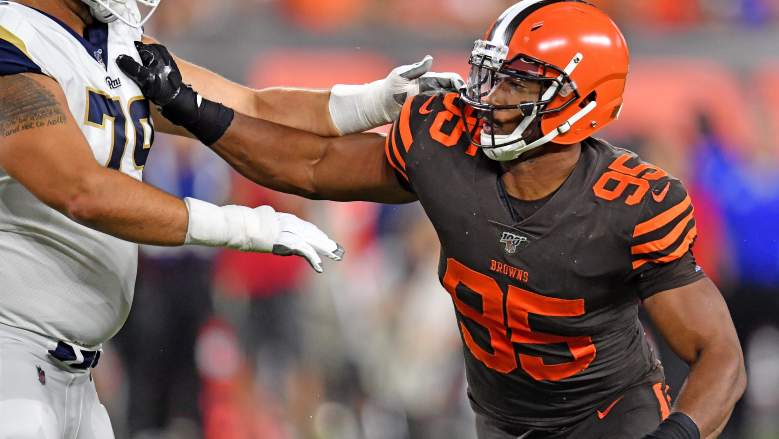 In an interview with Tom Reed of The Athletic, Garrett reflected on the timing of an ESPN interview where he doubled down that Rudolph’s racial slur triggered his actions.

“I dropped the ball there,” Garrett said. “(My father) was right. Have your say some other day. That’s the best way to put it. Got to be smart with what you say and when you say it.”

Garrett then promised that he was done talking about the incident and would go with “next question” when he is asked about it.

Read More
Cleveland Browns, Football, NFL
If there was any doubt Myles Garrett was an athletic freak, the Browns defensive end provided some additional evidence backing his incredible abilities.