Nick Chubb is a straight-shooter with a quiet reputation. However, the soft-spoken Cleveland Browns running back has grown into a big role on the team, leading by example.

And when he speaks, people listen.

Chubb was the bright spot during the Browns disappointing 6-10 campaign a year ago. He came up just short of the rushing title, watching Titans RB Derrick Henry surge by him with a 211-yard performance in the season finale. Chubb totaled just 86 yards over the final two weeks — mostly due to inconsistent play-calling — finishing the year with 1,494 yards and eight touchdowns.

The Browns had entered the season with unprecedented hype, gracing magazine covers and garnering support as a Super Bowl pick. But it didn’t take longer than a Week 1 blowout at the hands of the Titans for things to start unraveling under former head coach Freddie Kitchens.

Chubb joined the Jim Rome Show in a rare interview appearance to break down why things went awry in a hurry.

“I said it before, I think we thought we were a lot better than we were. We thought it was going to just happen for us, we didn’t actually put the work in. We got this guy, and this guy, you know we’re straight, so we don’t need to actually work, it’s going to happen for us.

“Hard work beats talent when talent doesn’t work. I think that’s exactly what it was with us.”

While Chubb is notoriously quiet, he has gained a reputation as one of the best running backs in the NFL. He’s got a no-nonsense style on and off the field, which new head coach Kevin Stefanski appreciates.

Chubb was recently named to Pro Football Focus’ top 25 players under the age of 25. Here’s what the site had to say about him:

“Since he was drafted in the second round of the 2018 NFL Draft, no running back has graded out higher than Chubb as a rusher. In fact, his 92.1 rushing grade over the last two years is the only mark above 90.0. That mainly comes down to the fact that getting Chubb to the ground has been much easier said than done. His 110 missed tackles forced are more than any other player, and his 1,980 rushing yards after contact are fewer than only Derrick Henry. If you’re looking for a pure runner, there are few players in the league right now that I would take over Chubb.” 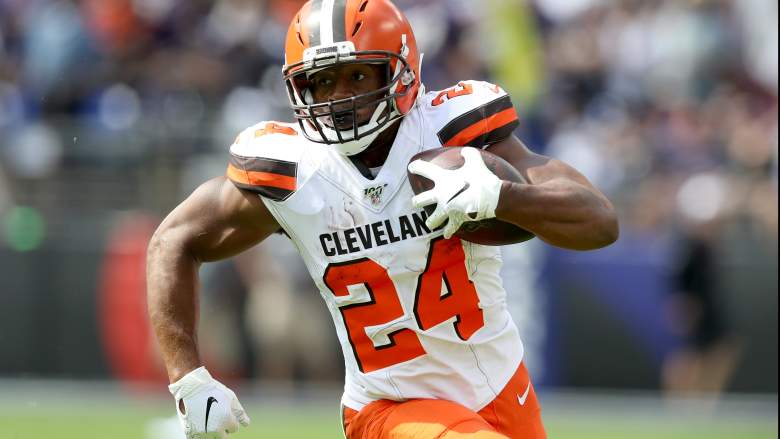 The Browns made some big additions to the offensive line this offseason and the prospect of blocking for Chubb is something that has newly-signed tackle Jack Conklin excited.

Conklin helped block for Henry in Tennessee as he collected 1,540 yards on the ground and went on to tear up the playoffs with two games over 180 yards, leading the Titans to the AFC Championship. Conklin hopes he can help Chubb do the same.