After shifting to a new look for his first year in Cleveland, it appears Browns star Odell Beckham Jr. has reverted back to his patented blond-haired look that he made famous during his time in New York.

Beckham was spotted on social media with his blond hair grown out a bit, a shift from the more clean cut look he sported last year. Browns fans are hoping a blond Beckham will have more fun during his second year in Cleveland and that he’ll be looking like his old self in the box score as well.

It appears OBJ has returned to blonde hair… pic.twitter.com/9rqYKO00Po

Despite breaking the 1,000-yard barrier last season, Beckham did not live up to the wild expectations set for him. He finished his first season in Cleveland with 1,035 yards and four touchdowns.

Odell Bouncing Back From Offseason Surgery

Beckham has also had a busy offseason, rehabbing hard in a return from offseason surgery. Beckham didn’t miss a game last season, but played through multiple injuries during his first season in Cleveland, most notably to his hip and groin. It was also reported that Beckham was playing through a sports hernia. He had core surgery in January. He broke down the ailments he dealt with last season on his personal YouTube Channel.

“So last year I was training in June and July and I was kind of just feeling stuff around groin area, abs and stuff like that and I went through training, get to August, went to training camp,” he said. “My third week of training camp I tear a little piece of my ab, so before the season, I kind of had the hernia thing going on. Sports hernia is what they call it.

“End up at the end of the season, torn abductor, torn rectus abdominis on the right, so pretty much [messed] up the whole year,” he added. “I didn’t try and say anything about it. Probably one of the worst surgeries I’ve ever had.”

Beckham has promised that this next season will be best, returning to his play that made him one of the top wide receivers in the league.

Beckham’s best season came in 2015, when he racked up 1,450 yards and 13 touchdowns with the Giants. During his first three years in the league OBJ went over 1,300 yards and double-digit touchdowns — feats he hasn’t accomplished since.

“Recovery’s going well,” Beckham said in the video. “Guess I’m really trying to put my body back together. I’ve been playing for 23 years, so for me, I’m trying to put it all back together in seven months. Trying to build up resiliency, more strength.” 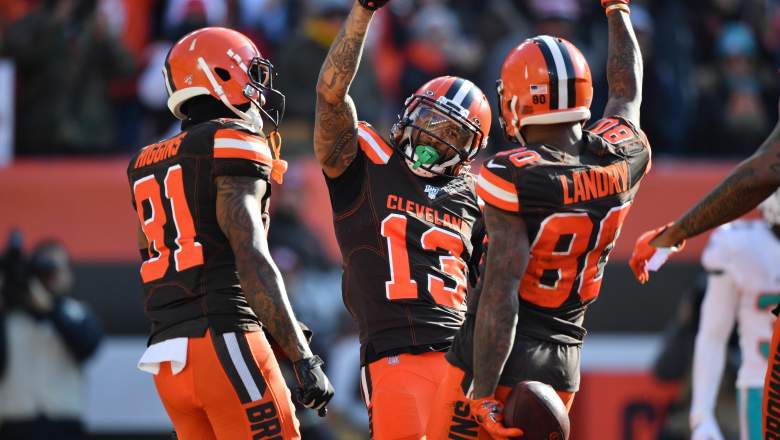 Beckham’s teammate and best friend Jarvis Landry also had surgery in the offseason to repair his hip. Landry has not missed a game in his career, earning a reputation as an iron man at the wide receiver position. On top of that, he was extremely productive despite being banged up, collecting a career-high 1174 yards last season and six touchdowns.

Landry said one of his biggest forms of motivation has been talking and watching his buddy, Beckham.

“It’s crucial point in our recovery process to get our strength back,” Landry said. “Seeing his process has motivated me.”

Read More
Cleveland Browns, Football, NFL
After shifting to a new look for his first year in Cleveland, it appears Browns star Odell Beckham Jr. has reverted back to his patented blonde-haired look.