Getty Legendary Miami Dolphins head coach Don Shula has passed away at the age of 90.

The football world has lost one of its most legendary members. Former Miami Dolphins head coach Don Shula died Monday, May 4, at the age of 90, per the Miami Herald’s Barry Jackson. Shula’s cause of death was not immediately known, according to the Miami Herald, but is not related to the coronavirus pandemic. Shula has the most regular season and total wins in league history, carrying a lifetime record of 347–173–6 (that’s a .665 winning percentage).

Shula was also the only head coach in NFL history to lead an undefeated team with the 1972 Dolphins. He won two Super Bowls with the Dolphins and won Coach of the Year four times. He coached the Dolphins from 1970-1995, winning 257 games in that span. 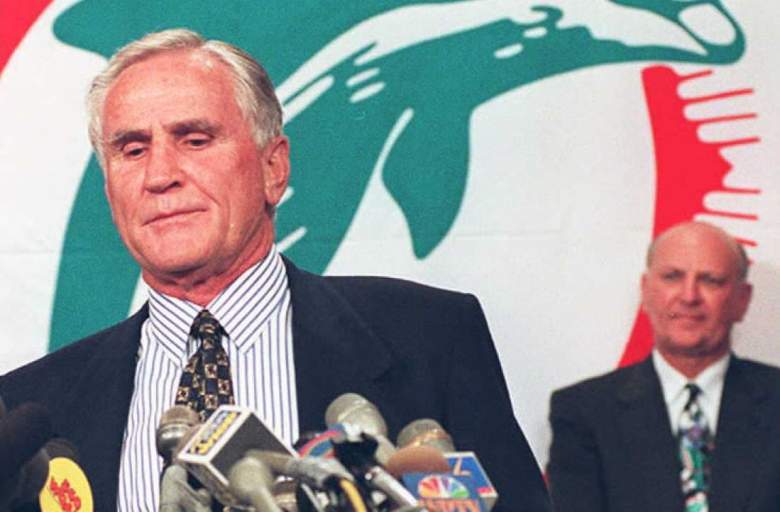 GettyLegendary Miami Dolphins head coach Don Shula has died at the age of 90.

Shula began his coaching career as an assistant coach with the Detroit Lions in 1960, and he was head coach of the Baltimore Colts from 1963-1969. Shula was 98-71 in his time with the Colts, and he managed to lead dominant teams in both the 1970s and 1980s later with the Dolphins.

Miami won two Super Bowls in the ’70s, and while the Dolphins didn’t win the big game under Shula in the ’80s — or again at all after he retired — he and quarterback Dan Marino were a formidable duo. Together, they kept the beyond-dominant 1985 Chicago Bears from becoming the second undefeated team in NFL history, as they were the only team to beat that famed ’85 Bears squad. Until Bill Belichick and Tom Brady took the NFL by storm, Shula and Marino were the winningest quarterback-coach duo in NFL history.

When he retired from the NFL in 2000, Marino gave Shula a special tribute. “I am honored that coach Shula is here today. Coach, not only have you been a tremendous impact on my career but you have taught me how to be a true professional. And I’m very proud of the fact that we were able to win more games than any other coach/quarterback combination in the history of football.”

The team addressed Shula’s death on Twitter shortly after the news broke. “The Miami Dolphins are saddened to announce that Head Coach Don Shula passed away peacefully at his home this morning,” the team’s Twitter post said. It included an official statement that read in part: “Don Shula was the patriarch of the Miami Dolphins for 50 years. He brought the winning edge to our franchise and put the Dolphins and the city of Miami in the national sports scene.”

Shula is survived by his wife, Mary Anne, and his children Dave, Donna, Sharon, Anne and Mike.

The Miami Dolphins are saddened to announce that Head Coach Don Shula passed away peacefully at his home this morning. pic.twitter.com/MKAtXFA4zd

Paul Zimmerman, who wrote a 1993 Sports Illustrated article in which Shula was named Sportsman of the Year, recalled asking the soon-to-be-legendary coach how he wanted to be remembered prior to the Dolphins’ 1973 Super Bowl victory. Shula’s response was beautifully blunt and indicative of his personality: “Didn’t lie to anyone. Didn’t screw anybody. Traveled first-class.”