The Catalan side are days away from facing Napoli and the extracurricular aspect of the game still tends to overshadow what they do on the pitch.  The reports swirl around Catalunya indicating that Quique Setién’s days are numbered, yet the club seems to have his back regardless of the situation.

On Thursday evening, FC Barcelona distanced themselves from the notion that former PSG and French national team coach Laurent Blanc would be making a return to one of his old stomping grounds at the Camp Nou.

According to a report from Diario AS, the club admit that they did have contact with the World Cup winner. They did not however reach out to him. This contact was made due to Blanc’s agent, Alain Migliaccio, who was reaching out to the institution and offering the coach to them.

A report from Mundo Deportivo stated that Blanc was “nowhere close to being their first option” to take over the Barcelona bench.  The offer that was made by Migliaccio, who happens to be Zinedine Zidane’s agent as well, was given the thumbs down.   The options that were being looked at were individuals like Dutch national team coach Ronald Koeman and Xavi Hernández.  Both of these individuals would be very complicated to obtain based on their current contractual situations.

This denies a report from French daily L’Equipe where they stated that his arrival to Barcelona was imminent. More importantly, this was the lead story for the daily on Thursday when they splashed the exclusive on their front page. According to them, the idea if being able to coach Barcelona was “seductive” for the 54-year-old. 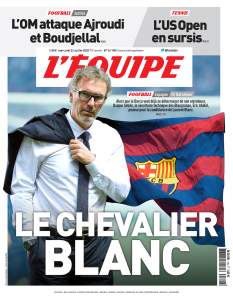 It was speculated that Blanc would step in for Setién for the upcoming season and would have served as a stopgap as the club would wait for Xavi to fulfill his contract over at Al-Sadd.

Blanc was looking to return to the coaching ranks after not working for the last four years.  His resume is impressive as in his last job with PSG  he led the team to win three league titles, three French Super Cups, three Coupe de France and two League Cups.

Prior to that, the Ales native won two leagues, a Super Cup and league cup with Bordeaux.

In between those two jobs, he led France to the quarterfinals of the 2014 World Cup, where they lost to eventual champions Germany. 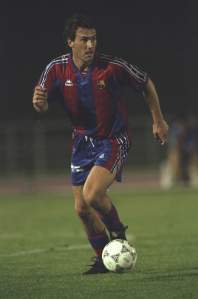 Getty ImagesBlanc with Barcelona in 1996

As a player, Blanc was viewed as an extremely elegant central defender coming out of the back and also had the ability to go forward in the attack.

During his short stint with the Blaugrana, Blanc won the Spanish Super Cup, the Copa del Rey and the Cup Winners Cup.

Read More
Soccer
It was rumored that former Barcelona and Manchester United defender Laurent Blanc would be the next coach of the Catalan giants, but the club had other plans.