Getty New Bears QB Nick Foles has been spotted practicing at a high school in Illinois.

While Chicago Bears quarterback Mitchell Trubisky has been throwing and practicing with his wide receivers for a while now, fellow Bears quarterback Nick Foles hasn’t gotten much of a chance to work out with the likes of Allen Robinson, Anthony Miller or Tarik Cohen — but that doesn’t mean Foles hasn’t been putting some work in.

Foles was finally spotted working out this past weekend when wide receiver Erik Rimas and Ryan Mann shared videos of their workouts with the new Bears quarterback. Mann, a senior running back at Vernon Hills, and Rimas, a two-sport athlete at the high school who also plays wideout, were both excited to be working with the former Super Bowl champion.

It took Foles a bit longer than Trubisky to get established in Chicago; he had to move from Florida, and his wife Tori just gave birth to their second child this summer, so he has had a lot on his plate. Whether he’s working out at a local Chicago high school or with the team, it’s good he’s getting some throws in before training camp — which both he and Trubisky will report to this week.

While both videos shared by Rimas and Mann don’t show Foles close up, his accuracy looks pretty good, and he doesn’t look as though he has much rust. He also looks decent on medium-to-long range throws, and he’s getting rid of the ball fast enough to be effective in this Bears offense. It’s certainly a very small sample size, but it’s all we’ve seen of Foles in workouts so far — which should change very soon.

Had a great session with @NickFoles today. Not everyday you get to catch for a Super Bowl MVP. @ryanjmann11 @ThomasMonken @JustinM1024 pic.twitter.com/1a8j8xVPde

Nick Foles Has Been Working Hard to Overcome the Collarbone Injury 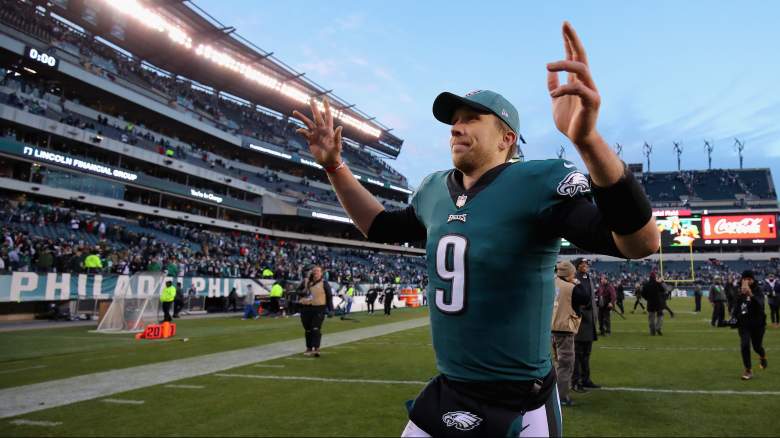 GettyNick Foles, formerly of the Philadelphia Eagles, will now compete with Mitch Trubisky to be the Bears’ starter. (Photo by Brett Carlsen/Getty Images)

Foles appeared earlier this offseason on Detroit Lions quarterback Chase Daniel’s internet show “Chase Chats,” and he noted that his broken collarbone in 2019 has affected his workouts and overall mentality. “I went into the offseason extremely hungry, as always, but even more hungry just cause of how things happened,” Foles said. He then discussed getting into Ironman workouts, which involve hardcore triathlon training.

“I’ve approached my training like Ironman training,” he said. “So, I developed a plan, and it got to a point where one of my last workouts I’m doing in this training was like a 9.8-mile run, a 33,000-yard swim and probably an hour-and-a-half on the bike … You build resilience, and that’s the thing that’s almost intoxicating to me, like getting to that point where I want to quit, and then pushing through it … you just test your flesh to the ultimate.”

Perhaps Trubisky has the advantage, as he is more familiar with the receiving corps, and he’s also the incumbent. But if Foles’ hard work translates on the field, it’ll be a tall mountain for Trubisky to climb if he want to beat Foles out.

READ NEXT: Bears’ QBs Blasted By Slew of NFL Coaches: ‘What Does This Guy Do?’