Women are now making inroads in the world of video games. EA Sports Spain announced that their version of FIFA 21 will have a women as an integral part of a commentary team. This is a revolutionary concept because of absence of a female voice in this franchise.  This is what made the move so impressive and such a game changer in the industry.

This was a first within this famous franchise as they presented the new game that will have French star Kylian Mbappé as the game of this year’s cover. The PSG star and World Cup winner will be the face of this year’s edition in all the versions that will be released.

Juanco is a presenter and reporter for Gol Television in Spain and he voice will be a part of the game as a reporter that will keep the players up to date on the substitutions as well as the injury status in the game.

The 41-year-old broadcaster is well known Spanish-speaking circles in Spain as well as in South American as she became a familiar face in the auto racing scene. She was a common fixture one as the paddock interviewer throughout the coverage of Formula 1 races and events like the 24 Hours of LeMans. 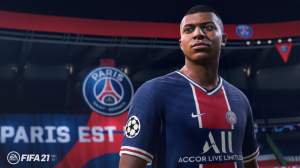 Her big jump came to when she moved from auto racing to soccer in the last few years and became a familiar face in the UEFA Champions League coverage in Spain.

Her biggest impact careerwise has been on the soccer end where she has truly . She is a constant featured personality on Gol Television’s coverage of La Liga and UEFA Champions League as a sideline reporter.

“I can’t be happier and prouder. Thanks EA Sports Spain for giving me ‘a voice’ #EternallyGrateful,”she tweeted.

The Canary Islands native will be heard on this video game when it is released worldwide on October 9. The game will be available for PS4, Xbox One and PC. The reason for this date to be a little bit later is due to the work that was being done by EA Sports’ development remotely over in Vancouver.

Read More
FIFA
Journalist Nira Juanco became the first female voice of EA Sports wildly popular FIFA franchise. This was one of the big announcements that the entity had in mind for the highly anticipated edition of their game.