In the coming weeks, Barcelona will be facing instances that will be pivotal in their future. For anyone following the club this season, this is not something that would be shocking, especially based on the way they have finished that least two seasons.

One of those players that was key this season, whose name was not Leo Messi or Marc-Andre ter Stegen was Arturo Vidal. Since arriving at Can Barça, the 33-year-old was vital both defending and attacking. This season, he progressively saw more playing time and became more relevant in the starting 11.

The major uncertainty with him is how much longer can he perform and would he be a viable bargaining chip as the board looks to acquire breathing room financially and some bargaining leverage for bringing in reinforcements for next season. Yet there arte two things that are undeniable. Vidal’s contract ends in June of next year and the team does not have anyone with his skillset and intangibles that can fill his eventual departure.

This is one of the topics discussed in Barcelona circles and one that gave his opinion was former gaffer Gerardo Martino.

In an interview with Chilean network CDF, the former Argentine national team coach described the Santiago native as “the heart of the team based on what he offers”.

“I see him recovering from last year because it was not good. This season was very good for him and he could continue at,” he admitted. 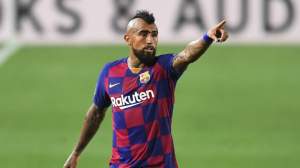 The former Newell’s Old Boys coach also looked to “convince” Quique Setién or the eventual manager to consider Vidal as a vital part of the team. In the process, he confessed that he would have loved to have the former Bayern and Juventus midfielder on his team when he coached the Blaugrana.

“I have a weakness for Arturo Vidal, if I could have, I would have brought him to Barcelona when I was coaching there,” he added.

Martino also discussed that the Culés were “closing their doors” to evolving tactically as a team. According to him, the club has seen itself eroding and seems to have limited their options in the last few years. In the eyes of the current Mexican national team coach, they should not inhibit themselves in that respect. “I would ask myself, if since Xavi and Iniesta have left, has the ‘Barcelona DNA’ been represented as faithfully”.

“I am of the belief that Barcelona need to have another alternative in terms of footballer,” Martino said. He expanded on that thought saying that in addition to players that can knock the ball around, Barça also need to find players that stand out due to their physical play. Outside of Xavi and Iniesta, Barcelona have also had players that were able to fulfill those roles such as Yaya Touré, Seydou Keita, Paulinho or Vidal himself.”

Martino was one of the coaches that had very little success when he arrived to the club back in 2013. He also mentioned that he still has a bitter taste in his mouth over what happened.

He recognized that is was that “worse year of his career”. The only success that Martino had at the club was winning the Spanish Supercup at the beginning of the season. That season, Barcelona lost the league to Atlético Madrid after they drew 1-1 at the Camp Nou in the final round of that season.

“It’s not about saying whether I liked coaching Barcelona or not’, but to be able to get to a big club does not happen all the time. Regardless, when you beginning to look back at what happened that year and how it was to be at a club as big with such media exposure and with such a need to achieve something important, evidently I suffered more than I enjoyed,” Martino concluded.