Getty Ifeadi Odenigbo could be in line for more playing time in the absence of Hunter.

The Minnesota Vikings chose to move on from a decade-long fan-favorite Everson Griffen this offseason — a necessary move as the team had to shed several contracts to get under the salary cap limit and re-sign several key contributors to the Vikings’ future.

To their fortune, the Vikings have hit big on turning late-round draft picks into NFL stars at defensive end.

First, it was Griffen, a fourth-round pick in 2010 that compiled 74.5 sacks in 10 seasons — good for fourth-most in franchise history. Then it was 2015 third-rounder Danielle Hunter, the youngest player to reach 50 career sacks and is on-pace to shred the Vikings’ career sack record.

Ifeadi Odenigbo could be next. Odenigbo, a 2018 seventh-round draft pick, was named the top breakout prospect of the 2020 season in the NFL by Football Outsiders, which ESPN featured. 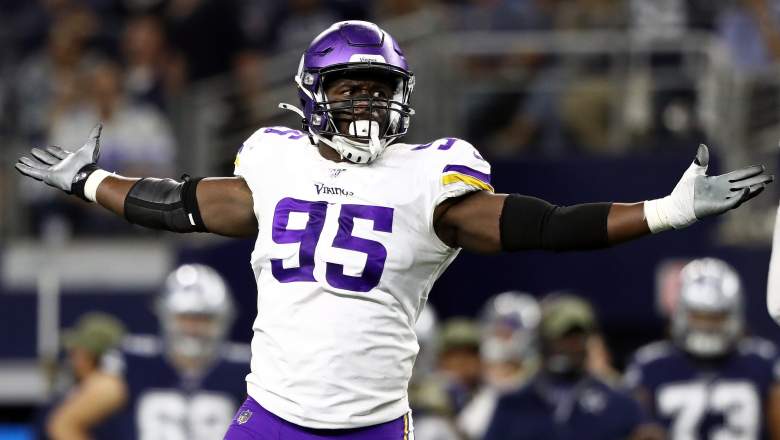 Football Outsiders, a website that tracks advanced statistics in the NFL, compiled the list of the 25 top young players who could have a breakout season. The criteria sought to name players who have flown under the radar so far in their NFL careers. All players listed were under the age of 26, were not first- or second-round draft picks.

With the Vikings parting with Everson Griffen, it’s a pretty clean projection to assume that Odenigbo will be moving into the starting lineup. But in case you need a reassuring word from Vikings defensive line coach/co-coordinator Andre Patterson, he told Vikings reporters in a conference call: “I’m excited about Ifeadi to continue to improve as a player. He made great strides last year, and he’s a tremendously hard worker. I know he’s busting his tail right now. … As a matter of fact, I have to talk to him about not overtraining.”

Odenigbo’s roots at Northwestern were as a power player with NFL pass-rush moves and flashes, but he was essentially platooned by the Wildcats. He led the Big Ten in sacks as a senior anyway, with 10, and ran a 4.72-second 40-yard dash at the combine. His performance in our SackSEER projection system was 62.7%, impressive for a low-round pick; Odenigbo had an explosion index of 0.61 and offered a lot of college production.

Over the last five games of last season, Odenigbo notched four of his seven sacks, forced a fumble and returned another fumble for a 56-yard touchdown. He brought down both Russell Wilson and Aaron Rodgers last season. He might still platoon with a different defender on pure run downs if that section of his game gets off to a poor start, but Odenigbo is on pace to become yet another late-round win on the edge for a Vikings team that already starts 2015 third-rounder Danielle Hunter.

Recently placed on the NFL’s COVID-19 reserve list along with seven other Vikings players, Odenigbo’s absence this early in the revised training camp schedule shouldn’t be a major concern towards his Week 1 availability.

If his development over the past two seasons is any indicator, Odenigbo could take another step forward into stardom in 2020.

READ NEXT: ‘I’d Love to Have Him:’ Mike Zimmer Lauds Ex-Vikings Star With Rival Looming


Trevor Squire is a Heavy contributor covering the Minnesota Vikings and journalism graduate from the University of Minnesota — Twin Cities. Connect with him on Twitter @trevordsquire and join our Vikings community at Heavy on Vikings on Facebook.

Read More
Football, Minnesota Vikings, NFL
The third-year defensive end has the most potential for a breakout season.