The breakup between the Minnesota Vikings and former beloved Minneapolis Miracle star Stefon Diggs has gotten sour over the past few days.

After the Vikings traded Diggs to the Buffalo Bills in the offseason, an ongoing feud on Twitter between Vikings and Bills fans has surfaced. Diggs recently agreed with a Bills fan that the Vikings “wasted his talent.”

Vikings players have stayed rather silent and supportive of Diggs despite his departure, but second-year tight end Irv Smith Jr. may have shaded his former teammate.

Smith posted a promotional series of photos for Nike on his Instagram that includes highlights of his past playing years in the NFL and college. The cover image reads “nothing can stop what we can do together.”

Together We Are Stronger… @nike @vikings @alabamafbl

The final photo is him picking up Adam Thielen from the field with Diggs tagged “noothanks” in the background. 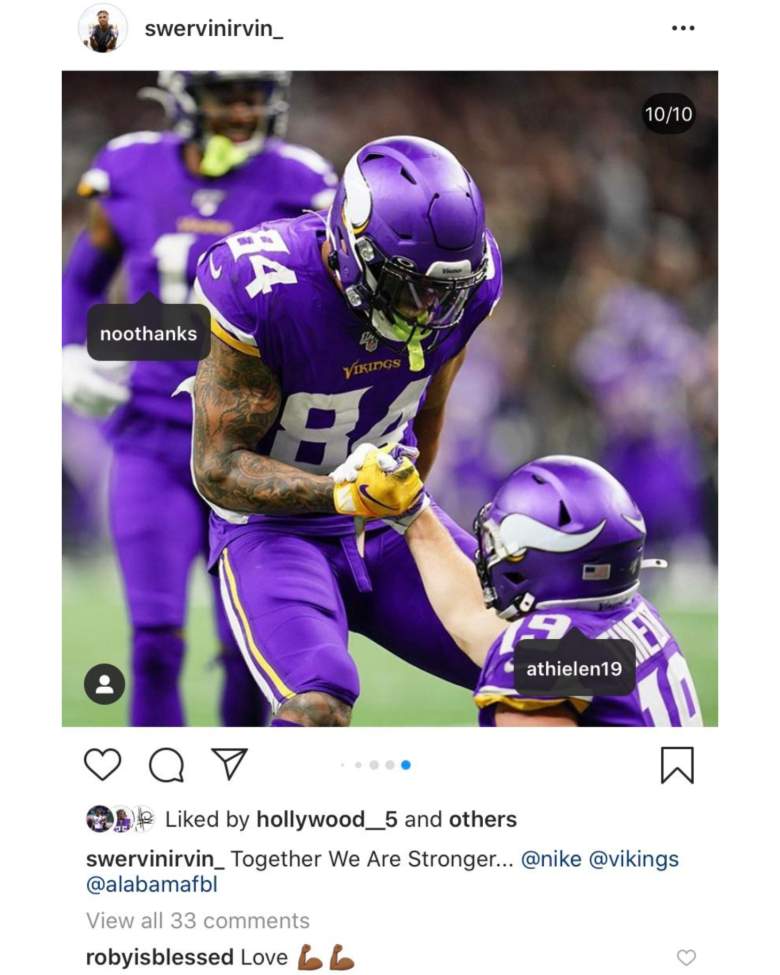 Full disclaimer: the Instagram username @noothanks is ironically Diggs’ burner account that he uses for more personal social media posts. Although there could possibly no ill-intent, every player that has an official verified Instagram account Smith tagged, besides Diggs’ (@stefondiggs).

Playing his first NFL season with Diggs last year, Smith didn’t see the best side of Diggs who became increasingly more vocal with his dissatisfaction with the team.

That doesn’t mean Diggs doesn’t have a soft spot for the team. He gave his best wishes to Vikings Chief Infection Officer and lead trainer Eric Sugarman, who tested positive for coronavirus last weekend.

Anderson agreed with Diggs’ original tweet, calling out the instability of the Vikings offense throughout his career.

Despite Diggs making three playoff appearances with the Vikings compared to none for Anderson, the two’s history with their respective teams has some similarities. The Vikings amid four changes at offensive coordinator and five at quarterback, haven’t finished in the top 10 in yardage yet under coach Mike Zimmer.

This is somewhat by design as Zimmer has pushed for the team to be run-heavy and clock-consuming, but Diggs, becoming second — and possibly third — in the Vikings pecking order, grew unsatisfied with his role on the offense.

One fan shared a comprehensive breakdown of the Vikings’ turbulence on offense which has been a mixture of player injuries and departures.