Getty The Celtics and Lakers will be active at Disney World next month.

The NBA’s long-awaited return is finally here and the 22 teams invited to Orlando will square off, each playing eight games to determine the seeding for this year’s playoffs.

Check out my projections for the win totals of each team along with their over/unders (via DraftKings Sportsbook). 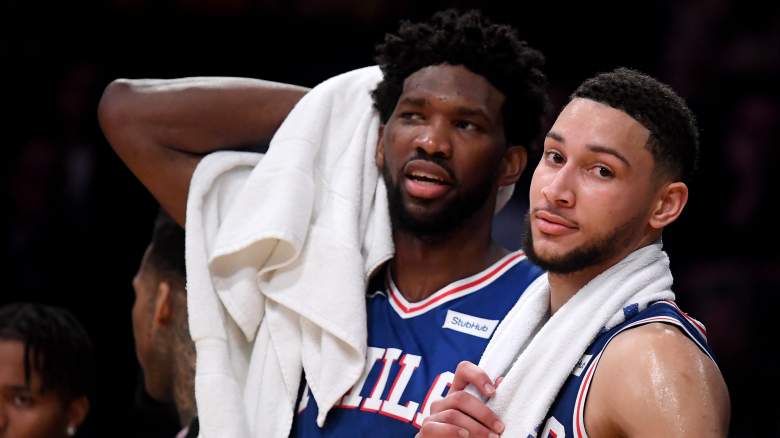 Washington Wizards – Over 1.5 Wins – Four of their eight games come against teams that will be in the midst of a back-to-back (Pacers, Pelicans, Thunder, Bucks). Additionally, Washington’s final game against Boston could come where the Celtics have nothing to play for. After a deeper dive, it appears the Wizards have a better chance at notching a couple wins than their roster and past performance indicates.

Brooklyn Nets – Under 2.5 Wins – The Nets, much like the Wizards, will have a skeleton of their roster. Spencer Dinwiddie, DeAndre Jordan, and Taurean Prince all caught COVID-19 and will not play. Neither Kyrie Irving, who was limited to just 20 games during his first season and Brooklyn nor Kevin Durant made the trip to Orlando. Still, this team’s lead on the eighth spot should be enough to secure them a playoff berth.

Orlando Magic – Over 3.5 Wins – Two games against the Nets and a matchup with the Kings should provide Orlando a baseline to making a .500 record an achievable goal. Overall, the Magic have the sixth-easiest schedule (via ESPN).

Philadelphia 76ers – Under 5.5 Wins – No team has had more bets on them recently to win the NBA championship than the Sixers, though their chances of capturing a title and their chances at winning the majority of the games during seeding play should be separated in bettors’ eyes. It’s unlikely that Philadelphia reaches the third seed and either the fourth or fifth is less desirable than the sixth, given the looming second-round matchup with the Bucks. I’d expect Brett Brown to play everyone together for a few of the eight matchups but give Joel Embiid, Al Horford, and whoever else needs rest some days off as well.

Indiana Pacers – Off the Board – The uncertain status of Domantas Sabonis, who left the bubble to treat plantar fasciitis, and Victor Oladipo, who we still don’t know how much or if he will play at all, makes setting a line and betting on Indiana risky. Still, I’d expect them to do well during the eight games and capture a top-5 seed.

Miami Heat – Under 4.5 Wins – The one could come back to haunt me but I see the Heat batting .500 in the eight seeding games. It will be difficult to catch the Celtics for the third seed and the club could realistically lock up a 4/5 seed as early as their fourth game against the Bucks. With no (home court) advantage between the 4th and 5th seeds, Miami could have a few games where they rest their veterans.

Boston Celtics – Under 5.5 Wins – I believe we’ll see these seeding games as another milestone in Jayson Tatum’s rise to stardom and six wins is achievable. However, they could easily have that 3rd seed locked up by the sixth contest, rendering their final two meaningless.

Toronto Raptors – Over 4.5 Wins – Toronto is getting a lot of hype for their chances of winning the Eastern Conference for the second-straight year and rightfully so. Expect them to look great in seeding play as they distance themselves from the Celtics (up three games heading into the games).

Milwaukee Bucks – Under 6.5 Wins – Milwaukee’s sustained great success during the first portion of the NBA and that’ll continue through the playoffs. Yet, projecting them to come away with 7-of-8 carry many risks, considering they have essentially already locked up the top spot in the Eastern Conference.

Top of the Western Conference 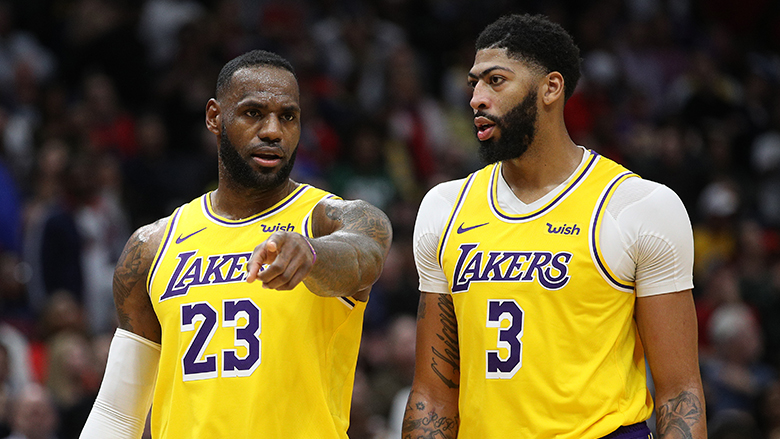 Los Angeles Lakers – Under 5.5 Wins – LeBron & Co. are sitting comfortably in the top spot in the West, needing only three wins to lock the spot (or less with the Clippers losing some games). It would be surprising if AD and LBJ didn’t take a game or two off.

Los Angeles Clippers – Under 5.5 Wins – The team has a little more to worry about with the Nuggets only 1.5 games behind them. L.A. is missing some pieces. Lou Williams won’t be available until the Clippers’ third game because of the quarantine required to ensure that his Magic City wing visit doesn’t give the rest of the team COVID-19. It’s not certain when Patrick Beverley will return from his hiatus from the bubble and Montrezl Harrell won’t be back before game 1. This is a deep team with some cupcake games, so the over is possible. However, I’d feel more comfortable taking the under given their load management track record and players currently out of pocket.

Denver Nuggets – Over 3.5 Wins – This total is lower than most other books but it comes with a -195 vig. Denver’s schedule is one of the toughest in the league but they should be able to come out the seeding games at .500.

Oklahoma City Thunder – Over 4.5 Wins – OKC will lose Dennis Schroder, as he plans on leaving the bubble for his wife’s pregnancy. Still, I’d expect SGA and Chris Paul to help lead this team to a top-5 seed, given their easy schedule (seventh-easiest, per ESPN).

Houston Rockets – Off the Board – Books are not taking action on the Rockets’ win total. It’s easy to envision Houston winning five or six of the eight games behind Harden, Russ, and plenty of 3-pointers.

Utah Jazz – Under 3.5 Wins – This could easily go either way, as their two games against the Spurs likely decide it. The latter of which comes in the final game, at which time Utah may already be locked into their seed.

Dallas Mavericks – Over 4.5 Wins – This is an underrated Mavs team. Dallas is actually tied with the Clippers for fifth, according to numberFire’s nERD metric, which measures efficiency and actual performance. If we see a bottom seed from either conference rise up and make an unexpected run to the Finals, Dallas is probably the best bet, as I detailed in their seeding games preview. That’s no certainty, as the Los Angeles goliaths are likely to knock out the competition on their way to a conference finals meeting, though a winning record in the seeding games is ultra-achievable.

Race for the 8th: Western Conference 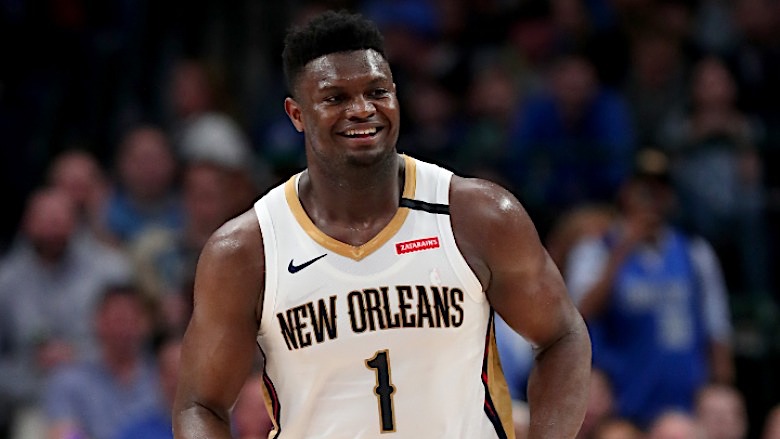 GettyZion Williamson and the Pelicans hope to reach the eighth seed in Orlando.

Memphis Grizzlies – Under 3.5 Wins – It would take a major slide for the Grizzlies to lose out on playing in the 8-9 play-in tournament. I believe Memphis gets there based on their 3.5-game lead on the eighth seed but I can’t envision them looking great heading into it. Memphis has the fifth-toughest schedule of the 22 NBA teams.

New Orleans Pelicans – Over 5.5 Wins – The Pelicans are as dangerous as any team that hasn’t already clinched a playoff spot. No team has an easier schedule than the Pelicans, though their first game (potentially without Zion Williamson, as he’s a game-time decision) and their lone back-to-back contest gives me pause.

Portland Trail Blazers – Over 3.5 Wins – Portland has some tough games but they have the talent to come out the seeding games with a winning record. They get Dallas and Denver on the second end of a back-to-back, which could be beneficial.

Sacramento Kings – Under 3.5 Wins – Sadly, I see the Kings being among the worst teams in the field of play. Games against Brooklyn’s shell of a roster, the Spurs, and the Magic (they match up well with Orlando) provide hope for a respectable win total as does Buddy Hield’s potential to get hot from downtown. However, I wouldn’t bet on Sacramento.

San Antonio Spurs – Under 2.5 Wins – The team shutting down DeMar DeRozan at some point adds risk to this projection, though I anticipate the Spurs playing well enough to rack up a few W’s behind their younger, frisky guards. Gregg Popovich’s club is only favored in two of the eight contests.

Phoenix Suns – Under 2.5 Wins – The game against the Wizards is the only contest Phoenix is favored in and while they could spring an upset or two, I’d expect them to dwell in the cellar of the seeding standings.

Loading more stories
wpDiscuz
0
0
Would love your thoughts, please comment.x
()
x
| Reply
Breaking down each of the 22 NBA teams' win total bets heading into the restart of the 2020 season in Orlando.