Zinedine Zidane’s face said it all after the final whistle blew.

There was an immense joy. You could say a sense of relief with a dash of revindication after placing Real Madrid at top Spanish football once more. After 209 matches coaches and 11 titles won in that span, he now saw a seat at the table amongst the best coaches in the world. It did seem he was near that Olympus when his players began tossing him into the air in the post-match celebrations.

It seems like a distant thought, but just one year ago, there were immense doubts looming over this team. The biggest one still cast upon them as they were unable to replace Cristiano Ronaldo and their offensive statistics proved it. Not only that, but the team was also decimated with injuries as the toll of multiple summers and grueling schedules started to catch up to them all. Yet that 7-3 loss to Atlético Madrid left many things exposed or even exacerbated others. It also placed Atleti as the team that seemed destined to knock Barcelona off the perch where they sat during the last three years.

As has been the tendency with Zidane, the team was not aesthetically pleasing, but they were extremely effective in terms of gettin the results they needed. Madrid were solid in all of their lines, but the effort was collective and that was something that was different as the season progressed. There was also something different about the gaffer this season. He read the game better, his tactical nous was more evident and his decision-making was better. All of this not made him more well-rounded as a coach, it made his strengths that much more evident. That was the starting point.

Zidane proved that not all sequels are bad. Yes, it was not easy, but his pragmatism and the way he was able to manage his players made him successful when it came to convey his message. Those qualities help keep Madrid navigating the steadiest in unprecedented waters. He was the steadiest amongst the erratic. Madrid was the strongest amongst the most vulnerable.

No, this is not a criticism, this is just a compliment knowing that overconfidence and lack of focus can set in. You have a Barcelona side that struggled towards the end, an Atleti that never were capable of finding their form in the middle of the season, but Madrid never faltered when the finish line was in sight. That has to do with what the Madrid mentality has always been able to do.

Former Barcelona right back Dani Alves mentioned this in an interview with Catalunya Radio. “Madrid have a mentality that make them better than they actually are. They have a belief in themselves and an attitude that makes them bigger than they are in crucial moments,” he said when talking about why Pep’s Barcelona were so successful against them.

Alves also mentioned that Guardiola constantly told them that they “had to outwork Madrid” to vanquish them. That is something that no one was ever able to do this season against Los Blancos. 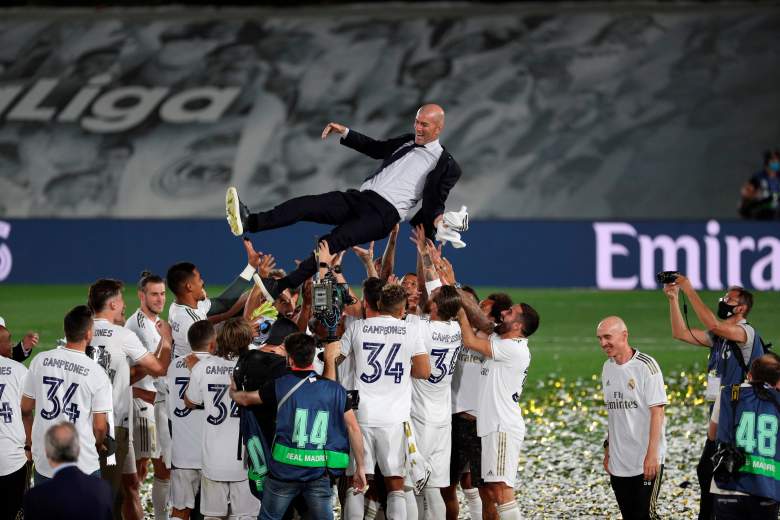 Hard work was expected by Zidane and understood from the players. More importantly, they knew that their hard work was the key to winning under the World Cup winner. Zidane was there for their last five Champions League wins as a player, assistant and coach. The former Juventus star realizes that at Madrid fans there understand that the glory comes from the ultimate prize. For los Merengues you can play like Di Stefano or Puskas or you can grind your way to greatness like Juanito and Sergio Ramos. At the end, winning is what counts and this team had the personality to do this.

Maybe their personality is the reason for their triumph. Sergio Ramos was the antihero leader that embodied the values of madridismo.  You can also name Federico Valverde, the young Uruguayan that became the general of the future for this club. Also Thibaut Courtois, who redeemed himself with his great form in goal after a disappointing debut last year. The Belgian was a wall defensively as he only allowed two goals since football resumed after the stoppage due to the pandemic.

But the star of this league was francés Karim Benzema. He was the best player in La Liga this season. Benzema was able to offer the best form of his career this season, scoring key goals to help earn Madrid various wins this season, making the difference in the league title race.

Many might say, “But VAR helped them”. You are probably right to an extent. But Madrid’s merits as a team cannot just be overshadowed by the overall incompetence of Spanish refereeing. Many teams have been benefitted in the past, yet few like Madrid and Barcelona. Refereeing is a topic that can be tackled in another conversation. Barcelona did play for Madrid. Barcelona did do everything to facilitate Madrid’s path in the league. What made Madrid so impressive was that they did not forgive. Everything that Madrid had as a virtue, Barcelona lacked. The same thing that could be said for Atleti who ended up being relegated in the championship race for quite a while.

For Madrid it is the end of the beginning. As they now embark on a difficult mission against Manchester City with their hopes set on once again winning the trophy that has made them the biggest team and sports brand on the planet.