Getty Adrian Peterson has found a new home in the NFL.

Nine out of the past ten NFL MVPs have been quarterbacks, a trend that’s entrenched in football as the game is predicated around the signal-caller.

For a non-quarterback to win the league’s MVP takes something beyond spectacular and borderline miraculous, and the Minnesota Vikings got just that from future Hall-of-Famer Adrian Peterson in 2012.

Peterson, coming off an ACL and MCL tear in 2011, came within 8 yards of matching Eric Dickerson’s all-time single-season rushing record, rushing for 2,097 rushing yards and 13 total TDs. He averaged 6 yards per carry and 131.1 rushing yards per game that season.

NFL Network’s Gil Brandt broke down the past 10 MVP performances and dawned on the conclusion that Peterson’s was the most-impressive this past decade.

Here’s what he wrote:

Conventional wisdom holds that it usually takes two seasons to fully recover from ligament injuries in the knee. In 2012, Peterson proved conventional wisdom doesn’t apply to him. Less than nine months after tearing his ACL and MCL in 2011, the running back opened 2012 by racking up 84 yards and two scores on the ground in a Week 1 win over the Jaguars. It was just the beginning of the second-greatest rushing season in NFL history. In the end, Peterson fell 8 yards short of Eric Dickerson’s all-time single-season record. What made this season even more remarkable was the fact that Peterson thrived while operating with second-year pro Christian Ponder under center. Not to knock Ponder, but this meant every opponent knew Peterson was going to get the football early and often, and they still couldn’t stop him. Peterson became the only non-QB to win MVP in the 2010s, and while playing time lost to injuries and suspension might keep the 35-year-old Washington veteran from breaking Emmitt Smith’s all-time rushing record, he’ll be a first-ballot Hall of Famer. 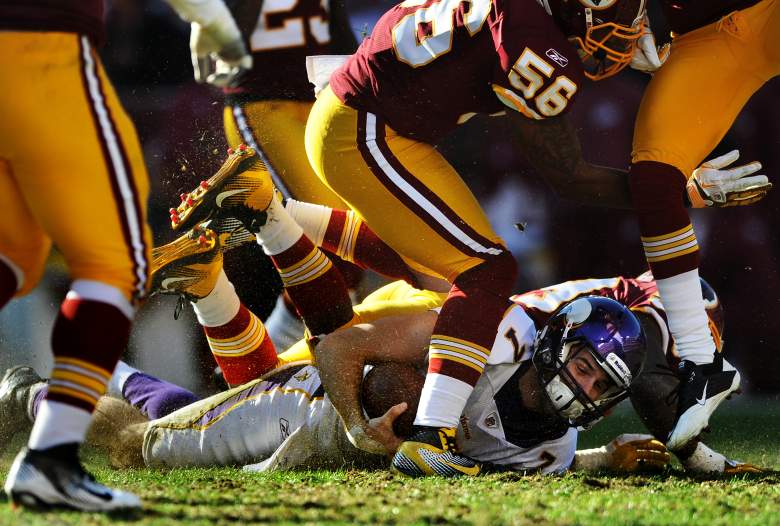 GettyChristian Ponder may have hampered the Vikings offense, but not necessarily Peterson in 2012.

While it’s convenient and cathartic to blame many of the Vikings’ shortcomings on the blunder of drafting quarterback Christian Ponder 12th overall in the 2011 draft, Ponder’s presence may not have hindered Peterson’s iconic 2012 season.

The Vikings leaned heavily on Peterson during Ponder’s second season, giving Peterson 348 carries — the second-most in a single season of his career. With Brett Favre under center in 2009 and 2010, Peterson still saw plenty of work — averaging 298.5 carries, 1,340.5 rushing yards and 388.5 receiving yards in two seasons.

Ponder, on the other hand, threw for only 2,935 yards, completing 300 of 484 pass attempts in 2012 (for reference, Kirk Cousins had 3,603 passing yards and completed just seven more passes than Ponder on 40 fewer attempts).

Yes, Ponder did hamper the Vikings offense which was next to last in the league in yards per attempt on play action, but Peterson didn’t face eight in the box nearly as the prevailing narrative offers.

Peterson faced a stacked box on 30 percent of his runs and averaged 6.45 yards per carry, compared to his 5.84 yards per carry against fewer than eight in the box. The Vikings ranked 15th in facing a loaded front on first and second down. While we can break down many moments of Peterson facing a stacked box, to a full-scale any team that lined up that tight a majority of the time would not fare well in the modern NFL.

Peterson’s yards per carry average is likely inflated from TD runs he broke off as teams were selling out to stop him before the first-down marker. Peterson had 40 runs of 15 or more yards —  16 of which were to either tackle spots on the line as Peterson saw the most success slashing the edges of the box and benefited from the tight formation.

A missed tackle meant a home-run for the Vikings star whose hallmark was a downhill, physical running style that could break to the outside and win in a foot race. He won his battles inside or outside the box and the looks the defense gave the Vikings opened up the possibilities for Peterson.

READ NEXT: Why the Vikings’ ‘Hard Knocks’ Would Have Been Full of Intrigue