Getty Ben Gedeon was placed on the PUP list on Monday.

Amid several roster moves on Monday, the quietest and potentially most detrimental to the Minnesota Vikings season was regarding linebacker Ben Gedeon.

Gedeon, who dealt with concussion issues last season, failed his physical and was added to the physically unable to perform list, per the Daily Norseman.  He cannot practice with the team until he is cleared. There’s been no indication of whether or not this is related to Gedeon’s concussion history.

When healthy, Gedeon has been one of the team’s best tacklers. Gedeon didn’t miss a tackle last season and only one in 2018, per the Athletic’s Arif Hasan. Gedeon started the 2019 season as a starter. He suffered a concussion against the New York Giants in Week 5 and another against the Dallas Cowboys in Week 11, which knocked him out of the season as he was placed on the injured reserve list. Gedeon had five starts in eight games played last season as a weakside linebacker alongside middle linebacker Eric Kendricks and outside linebacker Anthony Barr.

While the Vikings often field two linebackers in a growing passing league, Gedeon is the team’s go-to run specialist and the third linebacker when the Vikings expect a run. If Barr or Kendricks were to go down, Eric Wilson would likely be in line to absorb their duties. 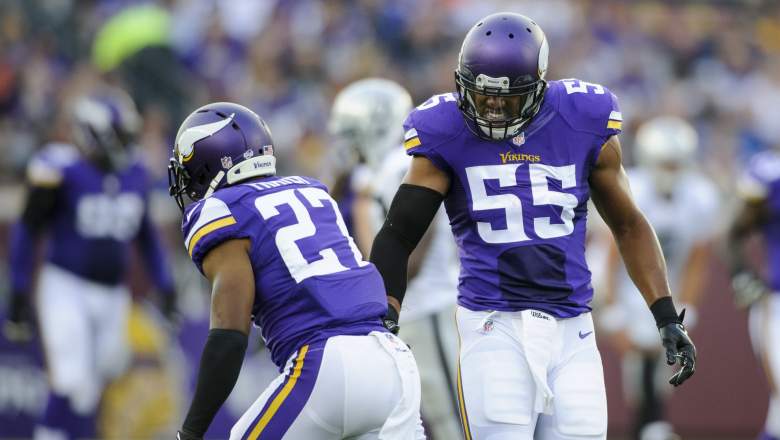 GettyAnthony Barr was activated from the Vikings’ COVID-19 reserve list.

Barr was activated off the COVID-19 reserve list, while Smith remains on the list. Smith, entering his second season, exceeded expectations at training camp last year and could replace Gedeon’s role in the lineup when he is activated.

Gedeon’s injury concerns coupled with a strong camp from Smith could be enough reason for the Vikings to move on from Gideon.

Gedeon and Wilson reach unrestricted free agency next offseason, when the Vikings will have to decide who to keep and who they can move on from.

The Vikings brought in fourth-round linebacker Troy Dye out of Oregon who should make an impact on special teams in his rookie year and could fill the weakside linebacker role by next season.

Beyond Dye, the Vikings brought in Baylor seventh-rounder Blake Lynch whose versatility could help him find a role early. Undrafted rookie Jordan Fehr out of Appalachian State, ran a 4.45 40-yard dash and played a similar role to Anthony Barr’s in college. The addition of XFL star Demarquis Gates, who led both the XFL and NFL in forced fumbles, gives the Vikings varying options at linebacker.