The writing is on the wall for Madrid star Gareth Bale and there is little doubt that he is on his way out over in Valdebebas. On Thursday, coach Zinedine Zidane confirmed that the Welsh international asked to be removed from the squad for their trip to England as they look to revert a 2-1 deficit against Manchester City at the Etihad Stadium.

At the same time, the former Spurs star was seen playing golf at a Madrid course. This generated even more ire from the Madrid faithful this incident piles on to the recent gestures that have insinuated a lack of interest and commitment to his team.

This obviously set alight all of Real Madrid fandom as, once again, his seriousness was questioned by them and would like to see him leave Valdebebas sooner rather than later.

In recent weeks, the Bale option to Manchester United seems to be off the table especially with the inroads that the Red Devils brass have made in their negotiation with Borussia Dortmund winger Jadon Sancho.  There was also talk that Portuguese superagent is also looking to place Bale’s also-disgruntled teammate, James Rodríguez, in the Mancunian outfit. 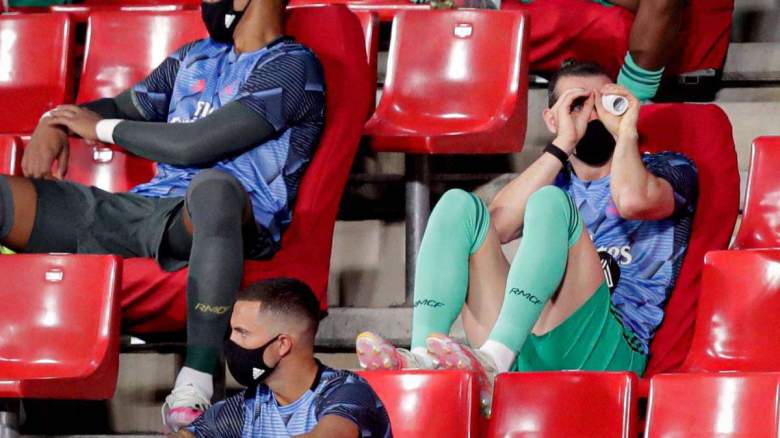 Getty Gareth Bale on the bench

In past interviews, Bale’s agent, Jonathan Barnett confirmed that there are no plans in moving elsewhere as he has a contract with the Merengues until June 2022.

People with absolutely no idea of what is actually going on slamming one of the finest players of our time. He’s enjoyed an incredible career, won trophies galore and is a nice bloke to boot. 🤦🏻‍♂️ https://t.co/WOwmlm5ifF

Not all is criticism though. Former England international and Match of the Day host Gary Lineker came out to the defense of Bale.

The former Spurs and Barcelona star stated that his critics are not aware of what is going on with the Welshman.

People with absolutely no idea of what is actually going on slamming one of the finest players of our time. He’s enjoyed an incredible career, won trophies galore and is a nice bloke to boot.

This latest bit of controversy might have compounded the overall legacy of a player that despite coming in as the highest transfer in world football a few years ago, was not able to fulfill the expectations generated by his price tag. He also was a contributor during Madrid’s four Champions League titles, but the shadow cast by Cristiano Ronaldo was too big to step out from. That was even more apparent after all his injuries and the Portuguese superstar’s eventual departure to Juventus in 2018; thus not being able to take the baton and become the absolute star he was expected to be.

Bale could be a viable option for any team as his talent is undeniable, but it is his salary that ends up being the eventual stumbling block that prevents him from gathering additional interest from some of the potential top bidders in Europe.

Read More
Soccer
Maligned Madrid star Gareth Bale finds himself in yet another controversial situation after having been caught playing golf while his team gets ready to face Manchester City.