Getty Kyle Sloter will be working out with the Chicago Bears this week.

It’s never been clear why the Vikings didn’t give quarterback Kyle Sloter a chance.

Sloter dazzled fans during the preseason each of the last three years but was never given a shot to back up Kirk Cousins after playing the past two preseasons with the Vikings. He was waived by the Vikings, who chose to go with Jake Browning as their third-string quarterback after the 2019 preseason and wound up with the Arizona Cardinals and the Detroit Lions.

Now, Sloter has the chance to join the Chicago Bears, his third NFC North team in a calendar year.

After going undrafted out of Northern Colorado, Sloter was picked up, then released by the Broncos at the end of the 2017 preseason — a move the Broncos were hoping to add him to practice squad.

Sloter completed 16 of 24 passes for 163 yards, a touchdown and an interception against the Bills in his final game with the Vikings. He completed a gaudy 76 percent of his passes for four TDs and one interception in 2019 (yes, against lesser competition) compiling a 120.0 passer rating and never gave up a sack.

Sloter Has Been Passed On Throughout His Career 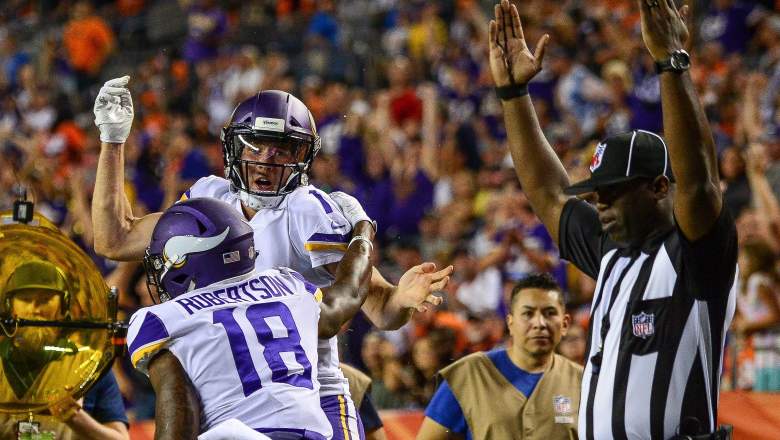 Sloter began his college career at Southern Miss, where he was redshirted and expected to be the Golden Eagles’ starter as a redshirt freshman. Amid a controversial coaching change, Sloter found himself fourth on the quarterback depth chart and switched to wide receiver to stay involved with the team. Sloter had his scholarship pulled, leading to his transfer to Northern Colorado.

He played wideout and was a returner his junior year before becoming the starting quarterback his senior season. Sloter threw for 2,653 yards, 29 touchdowns and 10 interceptions in his first year starting in college football.

Sloter has gradually gotten more experience at the position but has yet to be given the year-round reps to reach his full potential. He’ll likely be competing with Bears third-stringer Tyler Bray, who also has zero regular-season NFL experience.

READ NEXT: ‘He Gets Pissed About It:’ Vikings’ Kirk Cousins Lands On Unflattering List