Getty Stefon Diggs spoke to Bills media for the first time since his trade. It got a bit awkward.

Stefon Diggs had a game of cat and mouse in his first press conference as a member of the Buffalo Bills.

The ex-Vikings wideout spoke to Bills media for the first time since he was traded and largely brushed over his past grievances and subliminal messages over the past two years, while one of his tweets is believed to help facilitate his trade.

Longtime Bills reporter Vic Carucci raised the point of Diggs being “vocal” about wanting to leave the Vikings.

Diggs admitted he was “taken aback” by the question, asking what he was vocal about, followed by a sigh through a smile as Carucci clarified his question, asking “what makes you believe the situation here will be better than the one you left in Minnesota.”

As far as my past with Minnesota, I never actually said anything,” he said Wednesday. “But, to this new situation, I’m excited. There is no right or wrong or problems to be fixed from my old situation. I have a lot of respect for the Minnesota Vikings. At that time, a trade happened — you’ve kind of got to look at it for what it is. But I never really was vocal about what I did or didn’t like (in Minnesota).

Diggs was telling the truth that he never said anything declarative, but subliminal messaging and cryptic tweets have become a regularity in that seem to be to spite Vikings.

Diggs missed several practices back in October 2019 that resulted in $200,000 in fines. He told media, in a candid moment, that there is truth to trade rumors as the Bills did make several offers to the Vikings then.

After Kirk Cousins’ contract was extended back in March, Diggs tweeted “it’s time for a new beginning.”

The Bills sent an offer to the Vikings an hour after the tweet, Sports Illustrated’s Albert Breer detailed, spurring a series of calls between the two franchises and sealing the star wideouts fate that same night.

Carucci added that Bills general manager Brandon Beane said “he thought there was an opportunity to make this deal based on what (Diggs) posted on social media.”

Diggs replied, settling he did say something and even quoted his original tweet: “That’s fair. I never was really too vocal about it. ‘It’s time for a new beginning was enough said’.”

Last month, he agreed with a Bills fan that the Vikings “wasted his talent,” yet in front of the cameras, he kept it cordial. No knock for maintaining a good public image for his new fans, but Diggs’ social media begs to differ his statement Wednesday. 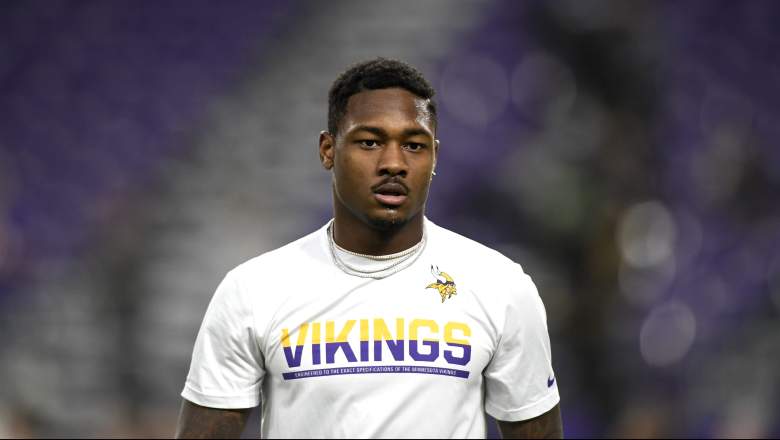 GettyDespite Diggs’ statement, his tweet did draw attention to his openness to a trade.

Ian Rapoport told NFL Now that Diggs’ social media was the smoke signal that it was a good time to offer as the Bills had tried to acquire Diggs in the past:

What actually triggered the trade, probably more so than him, as Zimmer colorfully described, being a little bit of a pain there — what triggered the trade more was Diggs kind of ambiguously tweeting earlier that day about potentially going somewhere

What happens, as you know Mike, is when a player kind of brings up his own future and discusses maybe being traded, teams start calling and going, ‘Oh, could we trade for this guy?’ I know that the Buffalo Bills — I believe the Eagles were also a little bit kind of in the mix there — but the Bills were very serious about it, and it was more so them giving an offer the Vikings couldn’t refuse than the Vikings wanting to deal him.

And with the Vikings over the salary cap, the trade quickly became about allocating draft picks, cutting costs and redeveloping a few positions on a team that has many pieces to contend already.

The Bills absorbed Diggs’ contract and recently had it restructured on Wednesday, NFL Network Mike Garafolo reported. He will now make $3.3 million more this season and $14.8 million in 2020 as the 11th highest-paid wide receiver in the league, per Sportrac.