Former Alabama Crimson Tide quarterback Mac Jones is earning high praise from fellow NFL players entering his second pro season. Jones, who earned Pro Bowl honors as a rookie with the New England Patriots after winning a National Championship at Alabama, has been ranked No. 85 in the NFL’s Top 100 Players of 2022. The list is based on a poll of the league’s players.

“Pro Bowl as a rookie, that’s always pretty impressive,” Baltimore Ravens cornerback and fellow Crimson Tide alum Marlon Humphrey said in an NFL Network video announcing Jones’ spot on the list. Jones’ Patriots teammate, Matthew Judon, added in the video, “Mac is a field general. From day one he came in yelling to get in the huddle. On his first touchdown, he didn’t even want the ball. He’s not a big ‘me’ guy, he’s a ‘we’ guy.”

The 23-year-old Jones, picked 15th overall by the Patriots in the 2021 draft, threw for 3,801 passing yards, 22 touchdowns and 13 interceptions during his first season in New England, leading the Pats to the playoffs. Las Vegas Raiders defensive end Chandler Jones told NFL Network, “I think he’s a helluva player. He’s going to be good for the Patriots franchise for a very long time. I believe that.”

Jones’ Patriots Teammate Says He ‘Came in a Leader’

Patriots defensive end Lawrence Guy told NFL Network, “The best thing about Mac is he came in a leader. He built that relationship with his teammates. The offensive line love him. You can see the respect that they have with him. He has broad shoulders. Every game that you saw him, wins and losses, he got better. … That’s the kind of player that you want as a young player. That’s the type of leader that you want.”

Denver Broncos wide receiver and former Alabama star Jerry Jeudy added, “He started off playing as a rookie, slowly, getting better every week.” Patriots’ wide receiver Braxton Berrios said in the NFL Network video, “The way he goes through the progressions, he doesn’t make many crucial errors or mistakes. He’s going to be a player in this league for a long time.”

New Orleans Saints linebacker Demario Davis said Jones helped bring the Patriots “back to the standards they’re used to. Definitely one of the most solid pick-ups in recent times in the league. His career is going to take off in a major way.”

Chandler Jones (@chanjones55): "I think he's a helluva player. He's gonna be good for the Patriots franchise for a very long time, I believe that." pic.twitter.com/nKS5bBjXr0

Patriots.com staff writer Evan Lazar tweeted, “Ultimately, I really don’t care where Mac Jones is ranked on the NFL Top 100. But it’s hilarious to see people get mad about it.”

Alex Barth, of The Sports Hub, added on Twitter, “A reminder that this list is voted on by current NFL players. So clearly, there’s some serious respect for Mac Jones around the league.” 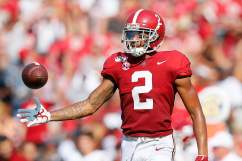 The NFL Network unveiled the first half of the top 100 list this weekend. Two other Alabama alums made the list. Washington Commanders defensive end Jonathan Allen was ranked at No. 88 and Miami Dolphins wide receiver came in at No. 63. The remainder of the top 100 list will be unveiled next weekend.

Waddle caught 104 passes for 1,015 yards and six touchdowns during his rookie season with the Dolphins. Jones told NFL Network about his Alabama teammate, “When we first played Miami in that first game you saw what he could do right off the bat. Super fast. He can scare people with his speed so everything looks the same. Like he’s going to go deep, but then he can compliment by breaking out or breaking in. But it all starts with the intial burst that he has.”

Allen is also making his debut on the list after five seasons in Washington. He finished the 2021 season with nine sacks and has 26 total during his career. Philadelphia Eagles center Jason Kelce told NFL Network about Allen, “I’ve been fortunate to play against him twice a year, ever since his rookie year,, and to watch that maturation and development go.” Defensive tackle Mike Daniels added, “This guy is a combinaton of the big guys that use finess and the big guys that use power. And you don’t know which one you’re going to get and it’s very scary, I would think, for an offensive lineman.”