Getty Images Hayden Hurst celebrates after he scores a touchdown against the New York Jets on October 10, 2021.

The Arizona Cardinals have no reason to freak out at the moment. They’re 5-0 and remain the only undefeated team in the NFL.

But the team has recently been hit with injuries. Top cornerbacks Byron Murphy and Marco Wilson were out against the San Francisco 49ers. Center Rodney Hudson left the game against the 49ers due to a ribs injury and his status is still uncertain.

But tight end Maxx Williams’ injury is the worst of them all. According to NFL insider Ian Rapoport on October 11, “Williams is feared to have suffered a major, season-ending knee injury.”

#AZCardinals TE Maxx Williams is feared to have suffered a major, season-ending knee injury on Sunday, source said. Williams, who has emerged as an important target for QB Kyler Murray, took a hard shot to his right knee and was quickly ruled out.

That’s due to a tackle from Emmanuel Moseley, whose helmet hit Williams’ knee in the process.

Williams was placed on IR on October 13. It’s looking like Williams’ season is over after his latest tweet.

I just want to say thank you to everyone who has reached out with support! Your thoughts and prayers mean more to me and my family then words can explain! This is just a speed bump not a road block for my career! Looking forward to being back and stronger next year!

Williams surprised everyone with his pass-catching abilities with 16 catches in four and a half games. His run and pass-blocking were above-average as well.

Darrell Daniels, Demetrius Harris and Ross Travis are the three tight ends on the Cardinals roster. While a couple of weeks could go by without a trade, it’s more likely than not Steve Keim will look at the market. Keim traded for edge rusher Markus Golden last season when there needed to be more pass rush after Chandler Jones was out for the season.

With $2.3 million in remaining salary cap space to work with according to OverTheCap, here are five options worth looking at for Arizona.

It was just reported that the Eagles are placing Dallas Goedert on the Reserve/COVID list, two days ahead of their Thursday Night game.

So that means Zach Ertz would be getting full-time work at the position and could be an audition for other teams. Ertz has just 14 catches for 160 yards in five games, but he has played a part-time role.

The Cardinals spoke with the Eagles in the offseason regarding a potential Ertz trade. Ertz stated a few months ago that he’d like to be an Eagle for life, but when Goedert comes back, he could change his mind.

The Cardinals are a powerhouse at the moment and it would be appealing to get full-time reps somewhere else. At the same time, Ertz is earning $8.5 million in the final year of his contract. Arizona would have his prorated contract and would still have to find a way to get under the cap. 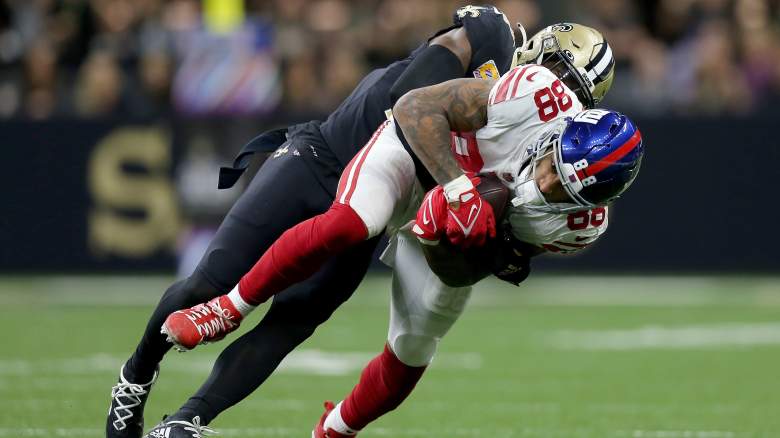 Getty ImagesEvan Engram is tackled against the New Orleans Saints in 2021.

Last season, even though Engram made the Pro Bowl, he had an abysmal 10.1% drop rate. This season, Engram missed the first two weeks due to injury. Engram caught four balls for 55 yards against the Cowboys on October 10 and had a decent PFF grade of 69.0.

Kliff Kingsbury could use Engram in a multitude amount of ways, and the Giants have also used Engram to run the football. Engram is another case of a player with an expiring contract and will be a free agent after 2021. It wouldn’t hurt to pry him away from the 1-4 Giants.

Hayden Hurst is in just his second season with the Atlanta Falcons and it could be his last. Hurst is a free agent after this season and 2021 first-round rookie TE Kyle Pitts burst onto the scene against the New York Jets on October 10.

He’s not known as a blocker which could be a red flag for the Cardinals, but he can be explosive. Hurst had 56 catches in 2020 along with six touchdowns and looked like the first-round pick that he was supposed to be.

He has fumbled three times in the last two games, but if he cleans it up in the ensuing weeks, Hurst would be a good rental for Arizona. 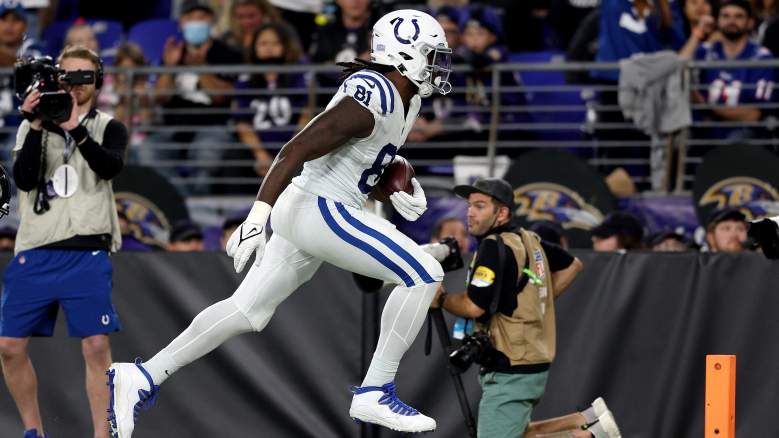 Getty ImagesMo Alie-Cox is forced out of bounds against the Baltimore Ravens in 2021.

Mo-Alie-Cox is in his fourth season in the NFL and all of them have been with the Colts. With a 1-4 record, the Colts could be selling its assets. Alie-Cox is known for his blocking but has also made strides in receiving, averaging 13.8 yards per catch on his 9 receptions including two touchdowns. He’s an unrestricted free agent in 2022 and is someone the Cardinals could easily plug in the middle of the field.

You can find a stretch at the beginning of the 2020 season that Akins was arguably the Texans’ most reliable target. Akins recorded 11 catches, 122 yards and one touchdown in the first three weeks last season. So far in 2021, it’s been rough for Akins, recording just 8 catches. Akins is 29-years-old and while this isn’t a sexy option for Arizona, this would lean towards being safe.

Akins is a big-body tight end who has also learned how to pass block and run block.

“I’m more active in blocking this year, which is a big role for me, as well as the passing game,” said Akins on October 2. “We’re starting to get a rhythm, so whenever we’re called, we make plays.”

Akins has had a PFF pass-blocking grade over 70.0 for the last three weeks. Kingsbury loves a tight end who can pass block and Akins can do that.

Discover more from Heavy on Cardinals↓

Unlock the latest Arizona Cardinals news, rumors and exclusives — direct to your inbox. ↓

Loading more stories
wpDiscuz
0
0
Would love your thoughts, please comment.x
()
x
| Reply
The Cardinals have $2.3 million to work with according to OverTheCap. These are the five tight end options worth looking at.