With 14 games left in the regular season and a long injury report ahead of taking on the second-seeded Phoenix Suns Thursday night, that feels very unlikely.

Hence, why head coach Brad Stevens was seemingly overwhelmed when the opening question of Wednesday practice’s media availability was about which players have a chance to see the floor Thursday night and which ones will be seated in street clothes.

“Oh, man,” Stevens said, he didn’t know where to begin. “Kemba Walker) did not practice, he was not here — still feeling under the weather. (We’re) hopeful he’ll be able to go tomorrow but unsure.”

As for Jayson Tatum’s All-Star running mate in Jaylen Brown; it doesn’t look like we’ll be seeing him take on Devin Booker and the Phoenix Suns.

“Jaylen is doubtful for tomorrow,” Stevens said. “He was here. He’s got left shoulder bursitis. Let’s see, Smart was back and Evan Fournier is in the building but he’s still in health and safety protocols as far as game availability. And Rob (Williams) tried to do a little bit more and won’t be able to go tomorrow, too.”

The Celtics — winners of eight of their last 10 games — found their groove ahead of a 102-96 loss to the Chicago Bulls, Monday night. But the setback of not having four of your best players not named Jayson or Jaylen proved to be more challenging than they imagined.

Stevens was asked about his team’s continuity in the form of the Celtics’ recent stretch — which included a six-game winning streak prior to Monday.

“Even through this stretch we haven’t had a chance to do that,” Stevens said. “We’ve had a little bit of that when we were out West. But, still, that’s without (Evan) Fournier. Obviously, missing Rob (Williams) in the last game, as well. So, we just haven’t had that opportunity and I know we’re not unique in that. I know there are other teams that are dealing with that, as well. We’re hopeful within the next 14 games we can have everybody on the roster available but we’re still not there.” 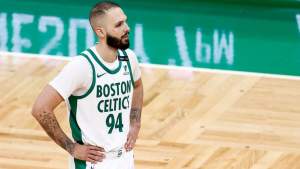 Getty Images
While Celtics fans remain patiently waiting for Fournier’s return, Tatum reminded the media just how difficult coming back from COVID-19 truly is. Jayson, who was tested positive for the virus earlier this season, admitted the illness took a lot out of him, physically.

And it took Tatum a while to regain his strength on the basketball court.

“I’ve talked to him (Fournier) quite a bit about it,” Tatum said after practice, Wednesday. “Just kind of tell him how I felt and things to look out for when you first get back. And I think that’s the toughest period; when you first get back. Obviously, because you’ve been sitting down for a while and because of the virus. So, hopefully, he’ll be all right and I’m sure he will. He knows I’m here for anything while he’s dealing with it.”

The Celtics will host Phoenix Thursday night at TD Garden before facing off against the Nets in Brooklyn, Friday.

Loading more stories
Will the 2020-21 Celtics ever be healthy? With 14 games left in the regular season and a long injury report ahead of a back-to-back set, it feels unlikely