The Brooklyn Nets might not have proven they can beat the best teams in the NBA just yet, but they are currently sitting comfortably with a winning record on the young season.

With Kevin Durant leading the way as an MVP frontrunner, the Nets have championship aspirations even without Kyrie Irving in the lineup. As a result, there’s not a lot of minutes in the lineup for a rookie, no matter how promising he may be.

In a recent assignment to the G-League, rookie guard Cam Thomas put up a whopping 46 points in a comeback victory over the Raptors 905, so he’s proven he can put up points. On a different team, he’d have a better shot to get consistent minutes, so maybe it’d be best for the Nets to flip him.

Bleacher Report’s Greg Swartz suggests the Nets trade away Thomas for a veteran that can contribute for the team right away. While his future does appear to be bright, his timeline might fit a rebuilding team a bit more.

Should the Nets Trade Thomas?

Nets rookie Cam Thomas scored 46 points in a comeback victory for the Long Island Nets over Raptors 905. I asked Steve Nash how he's assessing Cam despite his limited time in Brooklyn:
"We think he has a bright future. That’s what the Ge League is for."

Putting up 46 points is nothing to scoff at, even in the G-League. Nets head coach Steve Nash believes the rookie has a bright future, but there’s a chance it might not be with the Nets.

If he were on a team like the Pistons or Rockets, Thomas would likely be playing a lot, but the ability to do that on the Nets isn’t possible at the moment. Even without Irving, Thomas can’t seem to get a lot of minutes.

He’s averaging just 5.5 minutes per game in the games he does play in, and this is without Irving on the team.

If the Nets don’t want to get another piece, it would likely mean Thomas would have to be dangled as a valuable piece, so fans shouldn’t get too attached to him if the trade winds do start blowing as the year goes on.

Who Could the Nets Go After? 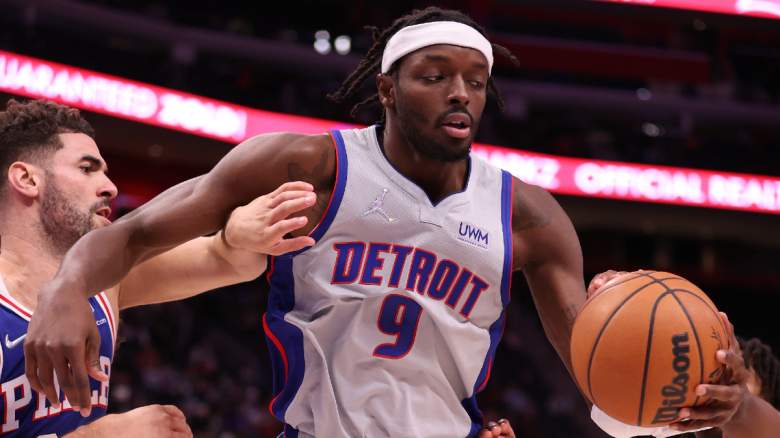 GettyDetroit Pistons forward Jerami Grant on the court during a game against the Philadelphia 76ers.

Someone who’s expected to be available later on is the Detroit Pistons forward Jerami Grant. The Nets have a bit of a black hole at the center position with Blake Griffin looking like a shell of himself, so the Nets could use another big man.

Now, Grant isn’t anywhere close to being a center, but he would certainly be an upgrade over Griffin at this stage in his career. The same Bleacher Report article also suggests the Pistons trade him, so why not to the Nets?

This would also be good for Thomas because he’d likely get instant minutes with the Pistons next to Cade Cunningham. The Pistons don’t have a clear future at the shooting guard positon, so perhaps Thomas would be able to fill that role for them.

It seems like it’d be a win-win for both teams, but this would require the Pistons to sign off on a trade for Grant. He chose to come to Detroit over sticking with the Nuggets, so he might be happy there and he’s the Pistons go-to option on offense.

Loading more stories
wpDiscuz
0
0
Would love your thoughts, please comment.x
()
x
| Reply
The Brooklyn Nets might be forced to trade their rookie.