To put it simply the Brooklyn Nets bench is downright putrid. In fact, The Nets as a team are very top-heavy. Brooklyn’s ‘Big Three’ of Kevin Durant, Kyrie Irving, and James Harden account for 80.7 of Brooklyn’s 121.4 points per game.

Brooklyn recently signed defensive specialist Andre Roberson to a free agent deal which is great for Brooklyn’s inability to stop the ball. Still, the Nets need to sign somebody who can come off the bench and get buckets for them the way that Caris LeVert and Taurean Prince used to. One former Sixth Man of the Year’s latest like on Twitter suggests that help may be on the way for the Nets.

Jamal Crawford Likes Photo of the Nets Lineup on Twitter

After the Nets announced the signing of lockdown defender Andre Roberson, Brandon ‘Scoop B’ Robinson, the host of Scoop B Radio tweeted out a picture comparing this year’s Nets squad to the old Oklahoma City Thunder squad.

The tweet was liked by three-time NBA Sixth Man of the Year Jamal Crawford. Last July, the Nets signed Crawford to a contract during the NBA restart. He was slated to be part of the Nets team during their time in the NBA bubble. Crawford’s time in Orlando did not last long as he suffered a hamstring injury during his first game with the Nets.

Jamal Crawford Details His Time With The Nets

The Seattle native made an appearance on Scoop B Radio with Brandon ‘Scoop B’ Robinson after his deal with the Nets was made official last summer to discuss why he chose to play for Brooklyn.

“Things happened kind of fast. I mean, we had, had dialogue with them just like we had other teams throughout the course of the year, but nothing translated at that time,” Crawford said to Scoop B via Nets Wire. “Maybe it wasn’t the right time. But then, with everything happening now, things kinda happened fast. … It accelerated really, really fast and it worked out. Very thankful for it.” 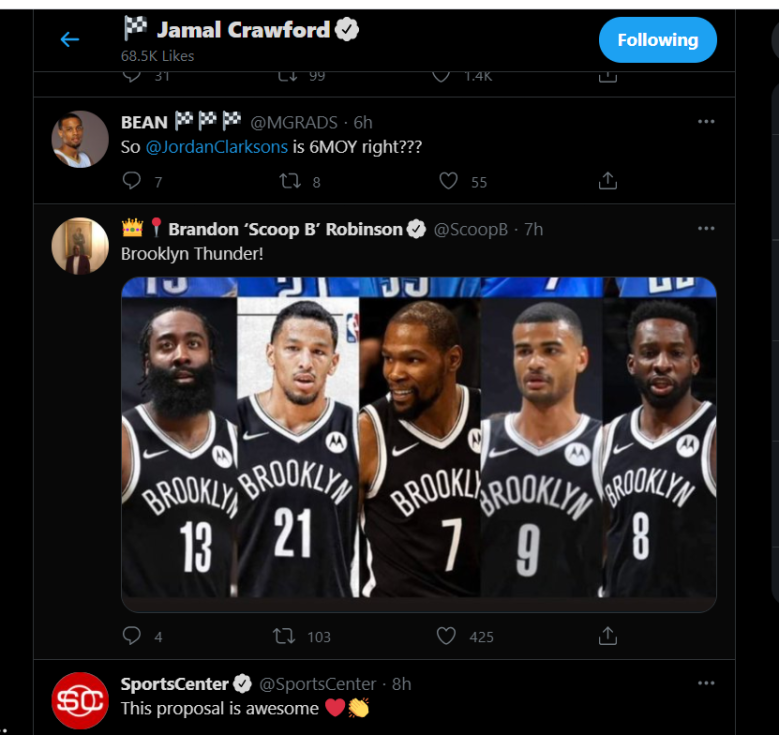 Former Players Think Crawford Should Be on a Roster

It has been a head-scratcher for many as to why Crawford has not been signed to a roster so late in the season. With Crawford’s elite ball-handling ability as well as his ability to score in bunches, the one-time Brooklyn Net could be a spark plug off any team’s bench. Former New York Knick Stephon Marbury thinks that as long as Crawford is in shape he can contribute to any team.

“I think if Jamal is in the physical shape to play 15-20 minutes at a high level, why not give him a chance,” Stephon Marbury told Scoop B via Nets Wire. “He’s perfect for the system in how they play. Run him through a high-level NBA workout for three to five days to see how his body recovers and let that be the tester.”

The bottom line is that the Nets need to bring in a player that can give them instant offense off of the bench. Nash can stagger the “Big Three” but in the playoffs, wins and losses come down to bench production. Crawford would be the perfect pickup for Brooklyn.

Loading more stories
wpDiscuz
0
0
Would love your thoughts, please comment.x
()
x
| Reply
One former Clipper's latest Twitter like has Nets fans wondering what the team has planned as the trade deadline approaches.