It has been a rough start to the season for Brooklyn Nets star James Harden, at least in terms of drawing fouls.

Thanks to some changes in how games are refereed, Harden has had trouble getting to the line this season, and it might have resulted in his shooting woes in the early goings.

In a loss against the Chicago Bulls, who are one of the NBA’s most surprising teams this year themselves, Harden was able to get a foul call and he immediately threw his hands up to celebrate.

It’s all in good fun, but that kind of celebration lets you know just the type of season he and the Nets are having so far as the refs figure out how to balance fouls with the no calls.

Late in the second quarter, Harden drove to the basket and drew a call and then celebrated with his teammates as it happened. Even coach Steve Nash was all smiles when it happened, but that could have been because it was a bucket that gave the Nets the lead.

Harden’s frustration was evident after the game, when he spoke to reporters.

Unfortunately, this basket didn’t factor much into the end result of the game as the Bulls crushed the Nets 118-95.

Harden finished with just 14 points, but he did make all three of his foul shots. Kevin Durant continued his torrid start to the year as he finished with 38 points to go along with 10 rebounds.

Life without Kyrie Irving has been difficult for the Nets, but they still find themselves with a 7-4 record, so there’s plenty of time left for the team to figure it all out without their star point guard.

Harden has shifted to point guard this season, and to go along with his lack of offseason prep due to injury, he’s had a rough go. He’s still shooting under 40 percent and he’s only averaging 18.3 points per game on the season. That’s a far cry from what he’s used to, and it’s hard to imagine it’s just the changes in ways games are called that is affecting him like this.

There’s little ready to believe that Harden won’t bounce back, but 11 games into the season and fans are still waiting for the superstar they know and love to return. 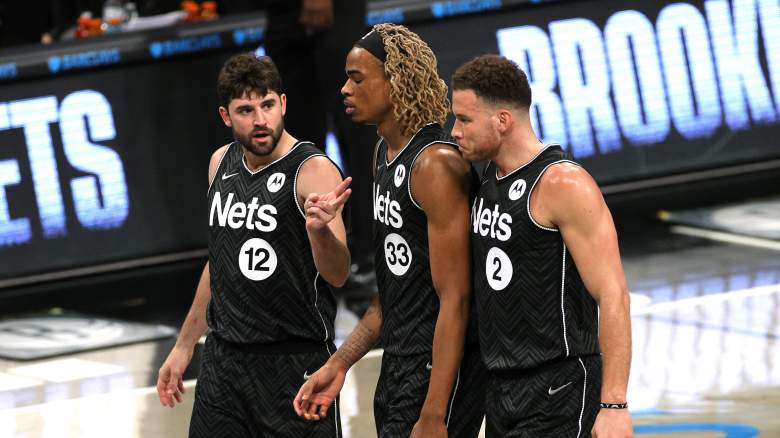 GettyNicolas Claxton, Joe Harris, and Blake Griffin chat during a matchup with the Charlotte Hornets.

On paper, the Nets have an easy slate of games ahead of them with the Magic, Pelicans and Thunder being the next three teams they face.

Of course, this is the NBA and games can’t be taken for granted, but this could be what Harden needs to get back on the right track. The Thunder have shown they can take down some juggernauts as evidenced by their two wins over the Lakers, so they will not be a team to sleep on.

The Pelicans haven’t looked good at all this season without Zion Williamson, and the Magic, led by upstart Cole Anthony, have looked solid but they still find themselves with a 3-8 record.

The Nets are currently sitting at the 6th spot in the Eastern Conference, but this slate of games could allow them to rise closer to the top.