The Brooklyn Nets may have just gotten started with their season but star forward Kevin Durant is already in mid season form when it comes to his Twitter account.

Durant is well-known for his interactions with fans on the social media app, and he often finds himself arguing with trolls for hours, but it makes for good entertainment for fans of his.

Over the past several days, the NBA has been releasing the list of the top 75 players in NBA history to celebrate the 75th anniversary of the NBA.

The list itself is a continuation of the top 50 one made 25 years ago, so it was expected that some names fans would otherwise considered to be shoe-ins would be left off.

Some prominent names are missing from the list, with the most notable one being Dwight Howard. There’s still a chance he could make the top 100 list, and perhaps he’ll be joined by Brooklyn Nets star Kyrie Irving.

There are some players around the league who believe Irving should already be on the list, and Golden State Warriors veteran Andre Igoudala says he should be in the top 20.

This led fan-favorite Twitter user DragonflyJonez to say that Kyrie appears to be a favorite of players around the league, essentially insulating that he might be overrated as a result.

“Kyrie really seems to be a hooper’s hooper,” he said. “I love Kyrie’s game but hoopers LOVE Kyrie’s game.”

Cuz u a casual

With Irving being Durant’s teammate, it makes sense for him to respond to a tweet like that, but he might’ve done it without that fact even being true.

He simply responded and called DragonflyJonez a casual. This is par for the course as far as Twitter interactions go for Durant, but Jonez definitely got the last laugh.

“A fully vaccinated casual,” he snapped back.

With this being the top 75 over the course of the entire NBA, it does make sense that some prominent names would be missing on the list, but does Kyrie Irving deserve a spot here? 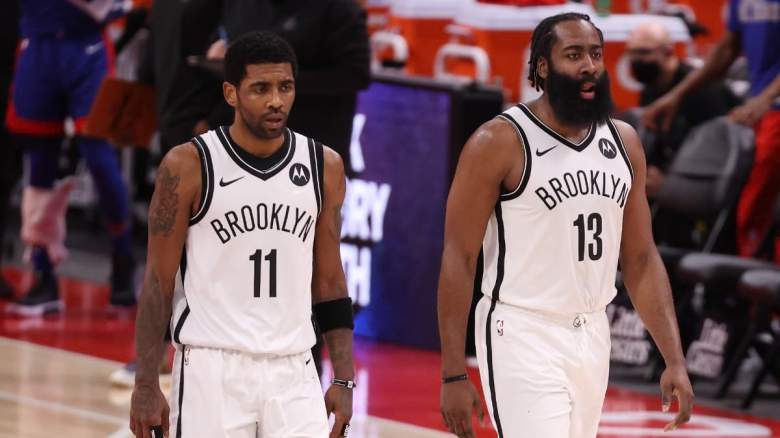 An NBA champion, 7-time All-Star and a member of the elusive 50-40-90 club, Irving has the resume that could stand against anymore in the NBA, but he didn’t find himself on the top 75 list.

It’s hard to argue against the case of a LeBron James, Kevin Garnett, Ray Allen or even Carmelo Anthony, but there are a few names that Irving could leap frog.

Portland Trail Blazers point guard Damian Lillard finds himself on this list, and while he’s immensely liked across the league and is viewed to be one of the most talented players in the whole NBA, his resume doesn’t exactly stack up to Irving’s.

The Blazers have never had much success in the playoffs under him, which might not be an indictment on him as a player, but more on how teams are built around him. Meanwhile, Irving had major success earlier in his NBA career when he was a member of the Cleveland Cavaliers with LeBron James.

After several deep playoff runs and a championship, Irving left to go to Boston and then Brooklyn, but never quite captured the magic he found in Cleveland in terms of playoff success.

He’s still one of the best players in the league, when he’s playing of course, so if his career continues to trend in the same direction it’s been going in and he perhaps finds himself with another championship in Brooklyn, then he’ll practically be guaranteed a spot on the NBA 100 list.

READ NEXT: Nets James Harden Reacts To Being Named to the NBA 75 Team