The Brooklyn Nets certainly look like they have the resume of a title contender if you just look at their wins and losses on the season, but there’s a little bit more going on than what meets the eye.

After the Tuesday night loss to the Warriors, the Nets dropped to 10-5 on the season, which is still a very respectable record, but it’s important to note that every single win, with the exception of the 76ers, has come against a team that’s currently sitting below .500.

The losses have come against the Bucks, Heat, Bulls, Warriors and Hornets. All of those teams, with the exception of maybe the Hornets, have championship aspirations and they are who will be standing in the way of the Nets. So far, the Nets haven’t proven they can topple the giants in the NBA, and they were completely ran off the court in the second half against the Warriors.

Head coach Steve Nash was asked about the team’s struggles against the top teams, and he put it bluntly that he doesn’t believe the Nets are ready to consider themselves in the same tier as them.

Steve Nash doesn't see the Nets in the top-tier of NBA teams yet:

"We've got a lot of work to do…I think the guys have been great as far as buying into what we want to do defensively. No one would have picked us as a top-10 defense to start the year" pic.twitter.com/lxt2VdlWf2

To put it simply, Nash doesn’t believe the Nets are quite on the level of some of the better teams in the league, but that doesn’t mean they can’t get there.

“Well, I just don’t think we’re in that category yet,” Nash said. “We’ve got a lot of work to do. You know, we’re trying to improve as a group, get better, and hopefully find a way to overcome some of our deficiencies by the end of the year.”

He did point out some positives of the year so far, notably their defense, and it’s not like the team is sitting with a losing record right now because they are still one of the top teams in terms of record.

“I think the guys have been great as far as buying into what we want to do defensively,” he continued. “No one would have picked us as a top-10 defense to start the year and we’re defending, finding a way.”

The NBA season is 82 games long, so it’s tough to know if there are a lot of issues just 15 games in, but that’s not exactly the start of the season either. This far into the season isn’t exactly a small sample size anymore, so the Nets are going to need to figure out how they can beat the top-tier teams. 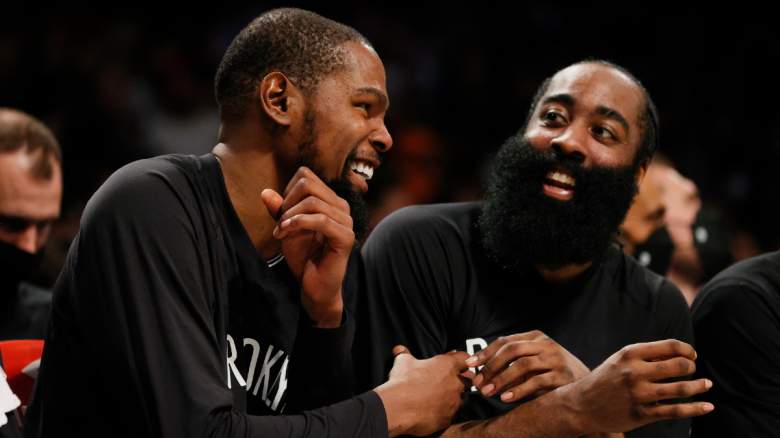 GettyJames Harden and Kevin Durant of the Brooklyn Nets laugh on the bench during a game against the Detroit Pistons.

With Kevin Durant on the roster, it’s hard to panic about the Nets because they’ll likely be fine, but they do need some of the other guys to step up. On offense, it feels like it mostly runs through Durant, but Harden has started to heat up, so he’ll be able to ease the burden a lot.

However, Blake Griffin is looking like a shell of himself to start the year, and one has to wonder just how much he has left in the tank. The Nets don’t have a ton of different options to go to barring a trade, so they might have to stick with what they got.