Getty Joe Burrow #9 of the Cincinnati Bengals throws a pass against the Baltimore Ravens during the AFC Wild Card playoff game at Paycor Stadium on January 15, 2023.

As fate would have it, the Buffalo Bills will face the Cincinnati Bengals in the AFC Divisional Playoffs on Sunday, January 22. This win-or-go-home matchup comes just 20 days after the Bills-Bengals’ Monday Night Football game was canceled following safety Damar Hamlin‘s medical emergency at Paycor Stadium, a traumatic event for everyone involved.

With the Bills’ 34-31 win over the Miami Dolphins in the Wild Card round on Sunday, and Cincinnati’s 24-17 defeat over the Baltimore Ravens, Bengals quarterback Joe Burrow and Co. must travel to Buffalo for this next matchup. On Monday, January 16, NBC Sports analyst Peter King asked Burrow about losing the ability to clinch home-field advantage after their Week 17 game was declared a no-contest, and if the 26-year-old had any “ill will” about the decision.

“It is what it is,” Burrow said, refusing to complain about things he can’t control. “That’s… that’s where we’re at. It’s our job to figure out how to go in there and get a win.”

Burrow and the entire Bengals organization handled the unprecedented situation regarding Hamlin with grace, and while head coach Zac Taylor slammed the NFL for suddenly changing the rules in ways that did not favor their team after the game was canceled, his ire was with Roger Goodell and the league, not the Bills.

Burrow, an Ohio native, acknowledged the benefits of playing at home during his postgame presser on Sunday. “I love our fans here… The fans do a great job of giving us energy and putting us in a good position to make it hard on opposing teams when they come in here,” but he’s still pumped about advancing to Orchard Park.

“It’s an exciting moment,” he told reporters. “They’re a great team with a great quarterback. I look forward to the challenge.” 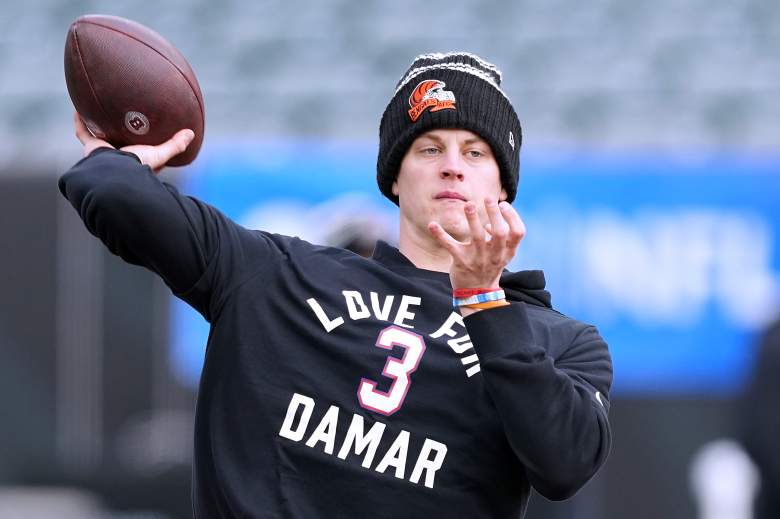 GettyJoe Burrow #9 of the Cincinnati Bengals warms up prior to the game against the Baltimore Ravens at Paycor Stadium on January 08, 2023.

Burrow credited Hamlin’s remarkable recovery for the team’s ability to get excited about playing football again, especially against the Bills. The Pro Bowler also made it clear that he has no regrets about how things unfolded after Hamlin went into cardiac arrest.

“That night, yeah, I was proud of the way things were handled,” Burrow told King. “I think it was handled the right way. Both teams showed support to each other. It was a hard moment for everybody. Head coaches handled it with class and the right decision was made at the end to cancel the game. I was proud to be an NFL player in that moment.

“When something like that happens, you’re not the Bengals and the Bills anymore. You’re NFL players who care about each other and want the best for one another. So that was a tough moment. It’s great that [Hamlin] is back in Buffalo with the team. I think that’ll make the game a lot easier to play.”

Taylor is also excited about this Bills/Bengals matchup. “It feels like two deserving teams (are facing each other),” he said on Sunday night, per Bengals.com. “Buffalo is one of the greatest environments to play in in all of football. I’ve been there many, many times and it’s a fun environment. It’s a worthy playoff environment, and so our guys are going to be juiced up and ready to go. It should be a heck of a game.”

Preparing for the Bills-Bengals Game Will Be ‘Tough’

In order to prepare for the big game, Bills left guard Rodger Saffold told The Athletic that studying the 9 minutes and two seconds of film they have against the Bengals will not be an easy task.

“I know it’s tough for our guys to watch because of Damar, but you have to take a detailed look at it. I don’t think it would be professional of us to not take any of those plays into account.” Saffold said. “It’s a chess mess when it comes to those types of games. Preparation is going to be key.”

Having such a small sample size of game tape also complicates things, as there were only 18 plays. While the Bengals were up 7-3, it’s impossible to know how things would’ve played out. Pro Football Focus analyst Sam Monson noted, “At 18 offensive plays, the Chargers were up 7-0 on the Jaguars, had the ball, and were about to score again and take command. Anything can happen over 18 plays… It was certainly interesting that Cincinnati was leading and looking good in the game, but who knows how the next 120 plays would have unfolded?”

Bills guard Ryan Bates is looking at this Bengals-Bills matchup as a fresh start. “We’ll be back to Square One,” he said. “They won’t know what we’re on. We won’t know what they’ll have schemed up for this week. We’ll go in and watch tape just like any other week and make sure we’re prepared.”

Loading more stories
wpDiscuz
0
0
Would love your thoughts, please comment.x
()
x
| Reply
Bengals quarterback Joe Burrow discusses traveling to Buffalo to face the Bills in the playoffs after their Week 17 matchup was canceled.