Getty Quarterback Josh Allen of the Buffalo Bills during the first half of the game against the Miami Dolphins on September 25, 2022.

The Buffalo Bills took their first loss of the season against division rival the Miami Dolphins on Sunday, September 25. While the Bills had a chance to pull off a last-minute comeback, quarterback Josh Allen was unable to get the offense into field goal position before the clock expired.

Immediately following Buffalo’s 21-19 defeat, NFL Network’s Cameron Wolfe tweeted that Allen went straight “into the X-ray room after the game” after appearing to suffer an injury on his throwing hand. ESPN’s Alaina Getzenber added in a tweet that Allen exited alongside an athletic trainer.

CBS Sports’ Josina Anderson, who visited Allen in the locker room after the game, said Allen “didn’t look bothered, from the standpoint of pain. Honestly, I think he was just taking in the loss in stride.”

WKBW reporter Matthew Bové tweeted, “He’s fine. He got a helmet or face mask in the hand late in the game. That was what they checked out after the game in the X-Ray room.”

During the postgame press conference, in which Allen appeared without a bandage, shared positive news concerning his throwing hand. “I’m good,” he said when asked if he needed any follow-up testing on the hand. When head coach Sean McDermott affirmed Allen’s assessment — “He’s good,” he told reporters — Bills fans were able to breathe a huge sigh of relief.

Allen also sent a strong message to his teammates following the loss, saying he has full confidence the Bills can turn things around when they face the Baltimore Ravens in Week 4. “Next man up. This is one game,” he said. “We’ll learn from this one tomorrow, take it on the chin and, again, prepare for next week. That’s all we can do. We can move forward. We’re 2-1. I’d like to be 3-0, but 2-1, we can still accomplish everything we want to accomplish.”

On the Bills’ outlook, ESPN’s Mike Greenberg tweeted, “I love how upset Josh Allen and the #Bills were about losing today. That was a tough spot, short week, on the road in the heat. They’re still the best team in the sport.”

The Bills’ depleted defense kept six-time Pro Bowler Tyreek Hill to just two receptions for 33 yards and the offense finished with 497 yards to the Dolphins’ 212.

The weekly picture of the sun’s performance to remind how opposing players are architecturally encouraged to have Heat illness like the Bills RT pic.twitter.com/nhpbb8RUII

Allen, who threw for 400 yards, completing 42-of-63 passes and two touchdowns, also helped the team’s rushing attack with 47 yards on eight carries — and he did it all in 110-degree weather. Even when on the sidelines at Hard Rock Stadium in Miami Gardens, Allen and his teammates were stuck melting under the sun while the Dolphins’ side of the field was covered in shade.

Allen, however, did not use the extreme weather as an excuse, even though offensive lineman Spencer Brown left the game with a heat-related illness in the first half, while McKenzie, tight end Dawson Knox, wide receiver Stefon Diggs and cornerback Xavien Howard all exited the game at some point in the second half for IV fluids.

“It was warm. Breathing was tough at some times. Ya know we had some really, really long drives; we had a 20-play drive ending in a field goal” Allen said, disappointed they couldn’t close it out with a touchdown.

Allen also took responsibility for his own mistakes, which included a too-short throw near the goal line intended for McKenzie, which could’ve been the game-winner.

As for the bobbled snap before halftime, “I couldn’t spike it, it would’ve gotten a loss of downs, so I tried to spit one and get it out there, but just didn’t play good situational football out there. … On the offensive side of the ball, we didn’t take care of business and it starts with me.”

McDermott Said the Team ‘Couldn’t Move’ After the Game 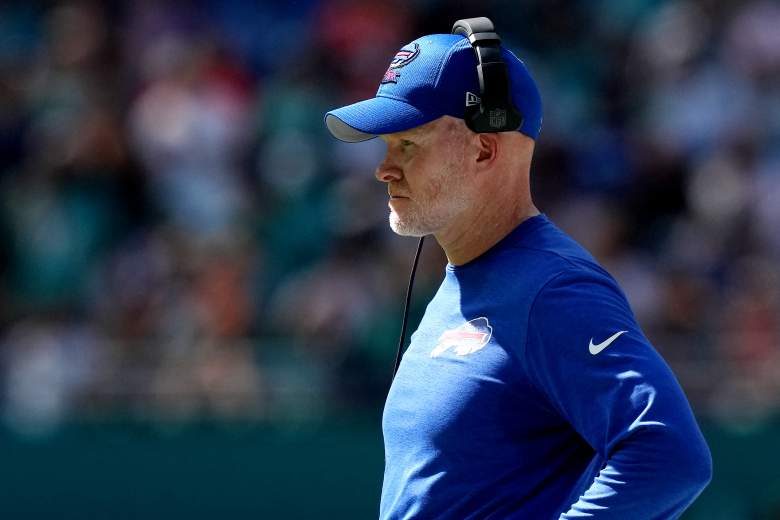 Even though the Bills didn’t get the result they were hoping for, McDermott said he was proud of how his team handled the heat and injuries.

“I told them in the locker room after the game — I didn’t even bring them up for a huddle because they all couldn’t move — that that was a heck of an effort,” McDermott said. “You never want to come up short. There are no ribbons for second place, and they know it. And so, we go back, we learn from this, and I think we’ll learn things that were really good about today.

“One of those is the guts and heart and the intangibles of our football team. And I think we’ve learned some things that weren’t very good today, which led to the result we got. … We just didn’t take care of the ball enough and come away with some takeaways but again, I liked the way we fought in all three phases until the end.”