Getty Odell Beckham Jr was watching as the Bills were defeated by the Vikings in overtime on Sunday, November 13.

While the Buffalo Bills experienced one of the craziest regular-season upsets by the Minnesota Vikings at Highmark Stadium on Sunday, November 13, the most sought-after free agent in the NFL, Odell Beckham Jr., was watching the rollercoaster of a matchup.

The Bills appeared to have the game in the bag after narrowly keeping the Vikings from scoring late in the fourth quarter. After that huge stop, Beckham tweeted, “UNBELIEVABLE GAME !!!!” which quickly racked over 25,000 likes.

However, in a stunning turn of events, Bills quarterback Josh Allen fumbled the snap on their own 1-yard line which turned into a surprise touchdown for Minnesota. Allen answered by quickly getting the ball down the field to set up kicker Tyler Bass for a 29-yard field goal, which sent the game into overtime. After Buffalo’s defense held Minnesota to a field goal on their first possession. Allen had the win in his hands but threw a red-zone pass straight into the arms of Vikings cornerback Patrick Peterson, sealing Minnesota’s 33-30 win.

What’s going on with Josh Allen these days?

While Bills edge rusher Von Miller has been publicly campaigning for Beckham to join him in Buffalo for months, and previously gloated that the move was already “said and done,” choking in overtime likely wasn’t the best showcase for a team looking to enlist the three-time Pro Bowler to Buffalo.

ESPN’s Adam Schefter reported on Sunday morning that in addition to the Bills, four other teams remain in competition for his services: the Cowboys, Giants, Chiefs, and 49ers. Schefter noted that the team he signs with “is expected to at least be a contender to advance in the postseason,” and unfortunately for Buffalo, after Sunday’s defeat, the Bills sit in third place in the AFC East with a 6-3 record.

The clock is ticking on OBJ’s final decision. PFF analyst Ari Meirov tweeted, “Beckham Jr. was fully cleared this past week, per @JayGlazer. Teams wanted to bring him in for a visit this week, but OBJ first wants to take about two weeks to get himself into football shape. He could sign with a team shortly after Thanksgiving.” 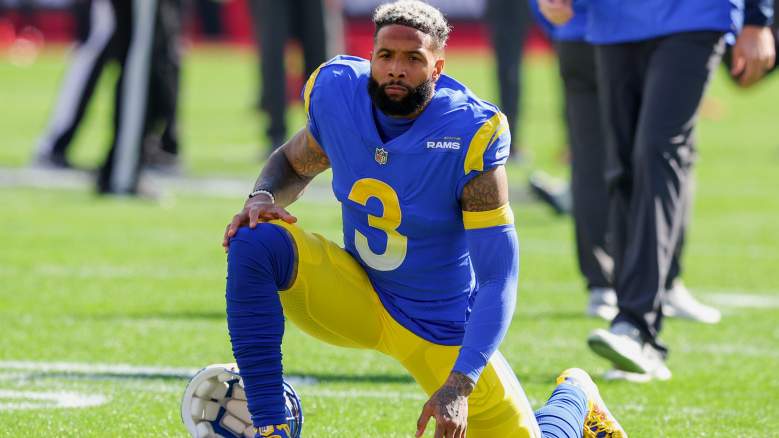 After making a big move to acquire Nyheim Nines from the Colts and bringing back safety Dean Marlowe from the Falcons just before the NFL’s trade deadline expired, Bills general manager Brandon Beane said the door was still very much open to adding Beckham.

“OBJ is a heck of a talent,” Beane said on November 2, per The Athletic‘s Joe Buscaglia. “If we think he can help his team, we’d be crazy not to at least look into it. Says if they did, financials, role would all have to line up.” According to OvertheCap.com, the Bills have approximately $918,889 in cap space, which means Beane will have to restructure a contract or two in order to make room for Beckham. However, for a team that’s going all in to win the championship this season, it seems like an effort worth making.

‘The Ball Is in OBJ’s Court,’ Miller Said

Before the Bills’ Week 10 matchup, Miller laid out his view of Beckham’s free agency situation, noting how he’s already put the 29-year-old receiver “on the phone” with Beane. “The ball is in his court,” the eight-time Pro Bowler said, during an appearance on The Pivot Podcast on Friday, November 11.

“I wouldn’t try to get him to come here if we didn’t have a chance,” Miller continued. “I take a look at this team and I see a spot for OBJ. Not just on the field, but off the field. I see him having success, and not just team success … I’ve been recruiting him. I’ve gave him the spiel. If he wants to come here, it’s because he wants to come here. He’s going to be happy because he made that choice for himself, and if he doesn’t, it’s all love.”

Von Miller- "I pray that teams think that they've got us figured out."#Bills #BillsMafia

While Allen is struggling with a mid-season slump, Miller is fully confident that Buffalo will turn things around. “Definitely not any panic from me,” Miller said after Sunday’s loss. “Games like this build character… when you’re a prize fighter you’re going to get hit a couple times,” he added. “It’s adversity we gotta push through. I’m excited to see how we respond.”

Next up, Buffalo will host the Cleveland Browns. The Bills are currently 8.5-point favorites to win.