It was the biggest comeback win of Week 1, and it belonged to Mitchell Trubisky and the Chicago Bears. Trailing 23-6 heading into the fourth quarter against the Detroit Lions, Trubisky overcame an abysmal start, throwing three touchdowns, two of which occurred in the game’s final minutes. The Bears scored 21 unanswered points, all in the fourth quarter, to win the game, 27-24.

As it turns out, in beating the Lions, they defied some pretty remarkable odds.

At one point, at the end of the third quarter, the Bears had a less than two percent chance of winning the game. They wound up beating those odds. Per NFL analyst Warren Sharp, teams were 779-3 since 2006 when they entered the fourth quarter with a lead of 17 points or higher. That stat is now 779-4 after the Bears’ exciting comeback win.

The Lions became just the 4th team since 2006 to blow a 17+ point lead entering the 4th quarter.

Mitch Trubisky vs Lions: Bad for 3 Quarters, Amazing in 1 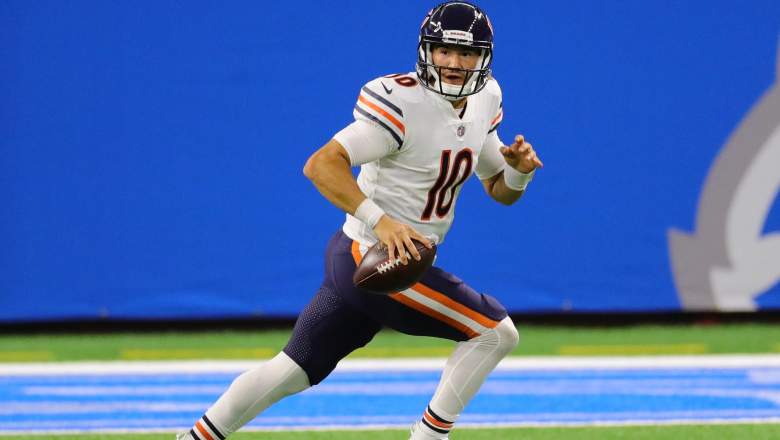 GettyDETROIT, MI – SEPTEMBER 13: Mitchell Trubisky #10 of the Chicago Bears runs for a first down during the fourth quarter of the game against the Detroit Lions at Ford Field on September 13, 2020 in Detroit, Michigan. Chicago defeated Detroit 27-23. (Photo by Leon Halip/Getty Images)

In the first three quarters against the Lions Sunday, Trubisky was 13-28 for 158 yards with no touchdowns. He looked shaky, unsure, and he displayed the exact same poor mechanics we were all told had improved this offseason. He also had a careless fumble he’s lucky offensive lineman Charles Leno recovered early in the fourth, but something else happened that quarter: he suddenly got good. Trubisky went 8-10 for 89 yards and three scores during the final quarter. He finished the game with a rating of 104.2.

After the game, Trubisky admitted playing his first game during a pandemic felt anything but normal. “We definitely missed the fans, home or away. … That’s another obstacle you have to overcome. You’ve got to create your own energy for your team and your offense.”

Trubisky Focused on Taking it One Game at a Time

Mitchell Trubisky on win over Lions: 'We knew we weren't out of it' | Chicago BearsQuarterback Mitchell Trubisky meets with the media after the Bears' 27-23 victory over the Detroit Lions. Subscribe to the Bears YT Channel: http://chgobrs.com/1LfmYsY More Bears NFL Action: https://bit.ly/33gtjDp #ChicagoBears #Bears #NFL Keep up-to-date on all things Bears: Visit http://www.ChicagoBears.com for more. Follow: http://Twitter.com/ChicagoBears Follow: https://www.instagram.com/chicagobears Like: https://Facebook.com/ChicagoBears2020-09-13T22:14:44Z

“We stuck together. I’m really proud of the team, the way we battled, the way we came back. It says a lot about our character about how we never gave up on each other,” Trubisky said after the game, adding:

“If you’re focused on writing the story while you’re going through it, then you can kind of distract yourself. It’s better to just stay present, live in the moment, and that’s exactly what I’m trying to do. And then one day maybe I can look back on it and be proud of it because I know I’m going to give it everything I’ve got.”

The comeback was certainly a finish to remember, but it was also a historic win for the Bears from a franchise standpoint. It was just the second time since 1940 that they overcame a deficit of 17+ points in the fourth quarter to win a game. Hopefully Trubisky starts string four quarters of football together more frequently, making such comebacks unnecessary. But in the meantime, it’s one to bask in for Bears fans, as it doesn’t happen that often.

The other win? 1998 against the Lions. Who could forget Edgar Bennett’s TD throw to Chris Penn, and then Erik Kramer to Fabien Bownes before Kramer won it on a TD run?

Read More
Chicago Bears, NFL
One stat in particular shows just how miraculous the Bears' win against the Lions was.