Getty Jamon Brown just had a tryout with the Chicago Bears

It appears the Chicago Bears are still looking to add depth to their offensive line. Per NFL analyst Albert Breer, the team had veteran right guard Jamon Brown in for a tryout on Thursday.

Brown was a third-round draft pick by the then-St. Louis Rams in 2015, where he started 30 games over his first three seasons. He missed time early in his career due to a lower leg fracture, and he was also suspended for the first two games of the 2018 season for violating the league’s substance abuse policy. He was waived by the Rams shortly after that. 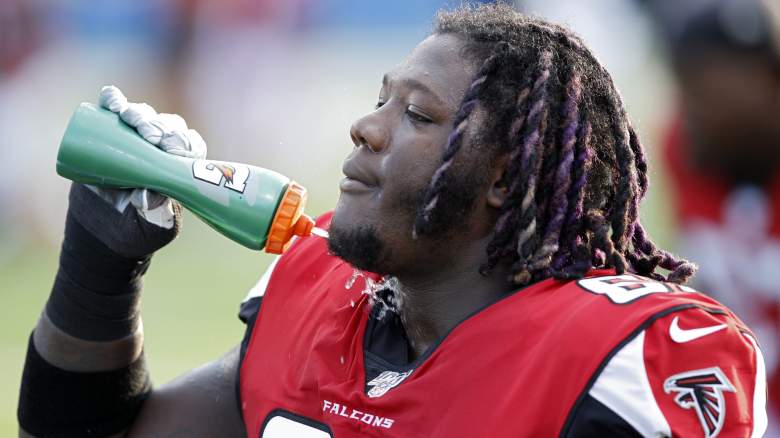 GettyRight guard Jamon Brown signed a three-year deal with the Atlanta Falcons in 2019. Instead, he was released by the team last month. (Photo by Joe Robbins/Getty Images)

Brown headed to New York after his stint with the Rams, and he immediately became the starting right guard for the Giants. He played the final eight games of 2018 with the team, finishing the season with the G-Men before catching on in Atlanta. The Falcons signed him to a three-year, $18.75 million deal in 2019, but his tenure with the team didn’t go as planned. He played in 10 games for the Falcons last year, starting nine, but he was benched towards the end of the year after Atlanta’s offensive line gave up a plethora of sacks in multiple games.

Atlanta released him late last month, while still owing him $4.75 million in guaranteed money for the 2020 season, so it’s likely Chicago could get him on the cheap this year. The Bears currently have Germain Ifedi listed as their starting right guard on the depth chart, with Rashaad Coward after him — and no one after that. If Brown’s tryout went well, he could be a solid depth piece for an already questionable offensive line, as he is far more experienced than Coward.

Even when he has been a starter at right guard, Brown wasn’t always on the field 100 percent of the time. In fact, he played 100 percent of his team’s offensive snaps just once — in 2017, when he was the starting right guard for the Rams. Apart from that season, Brown has played between 45-55 percent of his team’s offensive snaps, so he would very likely be no more than added depth behind Ifedi. He certainly won’t be a workhorse.

He also hasn’t been the most disciplined when it comes to penalties. In 60 games and 47 starts, Brown has amassed 21 yellow flags, including 10 false starts and eight holding calls. In his 10 games with the Falcons last season, he had three holding penalties, a false start, and another that was declined by the defense. Still, he has never had more than five penalties in a season, so if he’s healthy and cheap, he may be a good add.