Kicker Cody Parkey will likely be kicking in an NFL game for the first time since October of 2019. Parkey lives in infamy in the hearts and minds of Chicago Bears fans after the ‘Double Doink’ game in which his 43-yard field goal attempt in the 2018 NFC Wild Card game hit the uprights not once, but twice, before bouncing to the ground. The ill-fated attempt blew up Twitter, and it ended the Super Bowl hopes of a very promising Bears squad.

Per NFL insider Ian Rapoport, the Cleveland Browns are going to sign Parkey to their 53-man roster after they released kicker Austin Siebert Monday. Siebert missed an extra-point and a 41-yard field goal in the Browns’ 38-6 blowout loss to the Baltimore Ravens Sunday afternoon.

Source: The #Browns are signing K Cody Parkey to their 53-man roster, a sign he’ll kick on Thursday night. 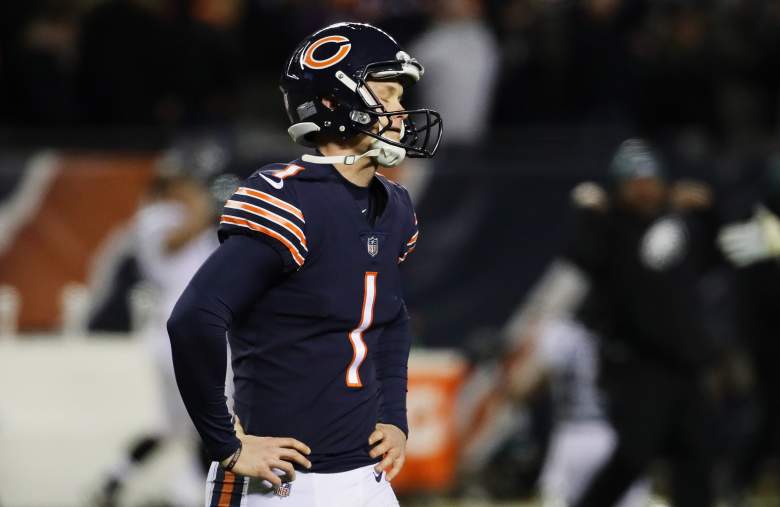 CHICAGO, ILLINOIS – JANUARY 06: Cody Parkey #1 of the Chicago Bears reacts after missing a field goal attempt in the final moments of their 15 to 16 loss to the Philadelphia Eagles in the NFC Wild Card Playoff game at Soldier Field on January 06, 2019 in Chicago, Illinois. (Photo by Jonathan Daniel/Getty Images)

Parkey was released by the Bears shortly after the infamous field goal attepmt, which wasn’t his first miss that year. He had missed seven field goals and three extra points in regular season action in his lone year with Chicago.

He appeared in three games for the Tennessee Titans last year, going 3-3 on his field goal attempts and 5-6 on his extra points, with his one miss — you guessed it — hitting the uprights, which is something he seems to do with more fervor than other kickers in the league.

Throughout his career, he has made over 84 percent of his field goals and 95 percent of his extra points, but he has struggled from the 40-49 yard range, as well as in high-pressure situations.

After the ‘Double-Doink,’ Parkey Went on The Today Show, Which the Bears Didn’t Appreciate

After missing the 43-yard field goal, Parkey did something the Bears didn’t like very much. He appeared on The Today Show a few days after the Bears’ playoff loss — something head coach Matt Nagy later said the kicker didn’t tell the team he was going to do.

Nagy called it a “We and not a me thing,” adding: “We always talk as a team, we win as a team and lose as a team. I didn’t necessarily think that was too much of a we thing.” He was released shortly after appearing on the morning show.

While some argued that the miss wasn’t Parkey’s fault because it ever-so-lightly grazed the tip of a Philadelphia Eagles defender’s finger — it was technically ruled a block by the league — many former kickers and punters agree that it was Parkey’s technique and mechanics that were responsible for the trajectory of the kick. Both Jay Feely and Chris Kluwe took to Twitter to say that despite the tip, the miss was still on Parkey.

Yeah I just saw the side shot, it got very slightly touched at the line but that kick was doomed from the getgo. You can compare it to the one they used the timeout on – first one he plants the proper distance away, the miss he steps in too close which forces a sweeping motion.

Did he tip it yes, but there wasn’t any penetration so that’s still on you as a kicker https://t.co/Rh6iXUBO77

Now, he’ll get another chance in Cleveland. Hopefully, the goal posts in Ohio are prepared for his arrival.