This got out of hand quickly. After deleting every image of himself in a Chicago Bears uniform from his Instagram account, rumors that wide receiver Allen Robinson had requested a trade began to make the rounds, courtesy of a report by the Chicago Tribune’s Brad Biggs.

Allen Robinson removed mentions of the #Bears from his social media accounts today. That's likely representative of his frustration over negotiations for a new contract but it's after the wide receiver asked for a trade.https://t.co/VsEDumUrnL

This news came just an hour or so after the NFL Network’s Tom Pelissero reported Robinson hadn’t requested a trade — yet.

#Bears WR Allen Robinson has removed references to the team from his social media — a reflection of his frustration over the state of talks on a new contract, sources say. No trade request as of now, and Chicago has a history of getting extensions done. Stay tuned. @nflnetwork pic.twitter.com/JKbhKEqYoX

As it turns out, Pelissero was correct. According to NFL insider Adam Schefter, Robinson’s agent, Brandon Parker, said the talented wideout did NOT request a trade after all, but is merely “unhappy” about his current situation in Chicago.

Brandon Parker, agent for Bears’ WR Allen Robinson, said he and his client have not requested a trade. However Robinson, who is in the last year of his contract, is unhappy that Chicago has been unwilling to pay him market value for wide receivers.

According to Biggs, the “divide between Robinson and the Bears runs deeper” than many may have originally thought:

“A league source told the Tribune that Robinson has asked about a possible trade. How far apart the sides are in negotiations on a new contract is unknown, but it’s highly unlikely Robinson would inquire about the possibility of being traded if they were anywhere near an agreement. Robinson is in the final year of a three-year, $42 million contract, and typically the Bears have been able to complete extensions for their top players before they begin a contract year. Despite that precedent for avoiding in-season negotiations, general manager Ryan Pace said last week he wasn’t opposed to continuing to work toward a deal.”

Bears GM Ryan Pace went out of his way to shell out major ducats to certain players this offseason, so cash cannot be too huge of a factor in Robinson’s contract talks. Eddie Jackson got a deserving contract extension, while free agent acquisitions Jimmy Graham, Nick Foles and Robert Quinn — two of which have not yet seen the field one week into the season — also got millions.

Here’s the thing- Pace’s entire off-season set up as a “going for it” situation with the other contracts signed.

This can’t be a money “issue”. #Bears 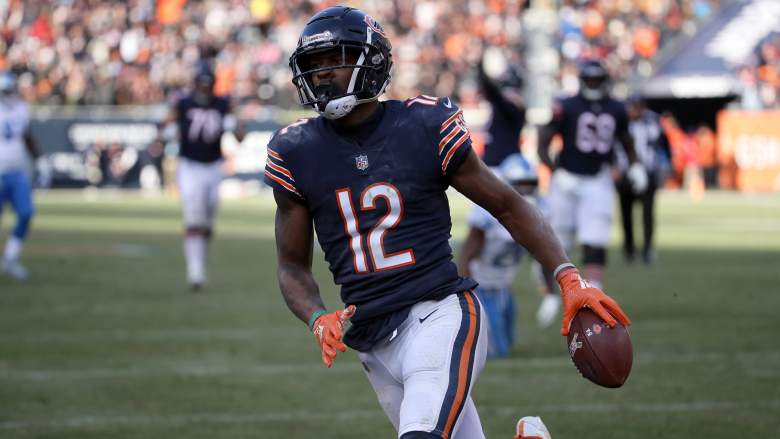 Chicago wouldn’t part ways with a player of Robinson’s caliber, would they? If their season starts to head south, they would absolutely consider it — but barring that, it’s doubtful. Considering the recent market for receivers like Brandin Cooks, the Bears could potentially get a first-round pick, which they haven’t had an abundance of in recent years, but it would take a huge offer to pry Robinson away.

There have been many WR trades recently, but perhaps none indicate Allen Robinson's value like the Amari Cooper and first two Brandin Cooks deals.

Both were traded for Round 1 picks despite their contracts being up in 1.5 years or fewer. If #Bears trade him, they'd get a haul.

Still, if this was all a negotiating tactic by Robinson, it has worked pretty well. He has been the Bears’ best player — arguably on either side of the ball — since his arrival in 2018, and both the fans and his teammates love him.

Either way, the spotlight is now on a Bears organization that, for some reason or another, has failed to take care of their best player the way they have in the past. Even though Robinson’s agent says he has not requested a trade, it’s clear he’s not happy in Chicago, and it’s not a good formula for success to have your top offensive weapon peeved.

Clearly, the drama in Chicago isn’t over. Stay tuned.