Getty Nick Foles and the Chicago Bears offense has been beyond disappointing in 2020.

Chicago Bears fans have to have the thickest skin of any fan base in the NFL at this point. Whenever their team plays in a prime time game, it seems as though the analyst and/or color commentator verbally brutalizes the team in some way.

A few weeks back, Monday Night Football’s Brian Griese caused a media frenzy around the team when he publicly commented on and criticized head coach Matt Nagy’s offense, hinting at a possible rift and communication issues between Nagy and quarterback Nick Foles. Both Nagy and Foles later downplayed Griese’s comments, but that didn’t mark the end of analysts putting the Bears on blast.

A week after Griese’s comments, Fox NFL Sunday’s Troy Aikman was called out by multiple media outlets for his pointed and unflattering takes on the Bears and Nagy’s offense when Chicago lost to the New Orleans Saints Week 8. Regardless of how accurate Aikman’s takes were — and many of them were spot on — more and more announcers are letting their disdain for the Chicago Bears be known.

Troy Aikman sounds outright annoyed he has to watch the Bears offense for one more second today.

Every week there's a new set of announcers who seem exasperated watching the Bears offense.

Bears will get the ball to open the second half.

Former NFL player and current ESPN commentator Booger McFarland added his name to the growing list of analysts who have taken public shots at the Bears. This time, though, McFarland slammed the Bears on a night Chicago wasn’t even playing.

McFarland was watching Thursday night’s Week 10 matchup between the Indianapolis Colts and the Tennessee Titans, and after an effective play executed on offense by the Titans, he decided to take to Twitter to throw a little salt in the wounds of Bears fans everywhere.

“What a play call by Titans, so creative I wonder what Chicago Bears fans think when they see other teams creativity,” McFarland Tweeted.

What a play call by Titans , so creative I wonder what Chicago Bears fans think when they see other teams creativity ? 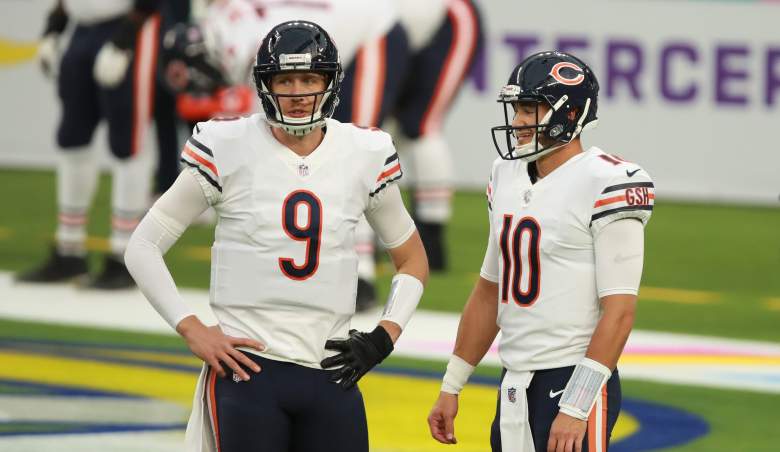 GettyBears quarterbacks Nick Foles and Mitch Trubisky have not been able to do much in Matt Nagy’s offensive scheme. (Photo by Joe Scarnici/Getty Images)

Not only do Bears fans have to listen to analysts bash their team regularly, but they also get bombarded with State Farm Insurance ads featuring their biggest rival and primary enemy in Aaron Rodgers — or if they’re really lucky, they get the other ads featuring the guy their GM passed up in Patrick Mahomes. They also have to re-live the ‘Double-Doink’ seemingly every time they play in a nationally televised game.

What do Bears fans think when they see other teams’ creativity? Well, when they’re used to watching one of the league’s worst offenses (they’re 28th in total offense currently), just about every other scheme surely looks like an improvement.

But here’s the thing: While McFarland was taking a jab at Matt Nagy’s lack of creativity and utter ineffectiveness on offense, he needn’t evoke Bears fans. They’re already painfully aware of how inept their offense is and has been for decades — and quite frankly, they deserve a break and a medal for sticking with a team that has done very little to reward their loyalty over the last 30+ years.