Getty Head coach Jim Harbaugh of the Michigan Wolverines may be looking for another coaching job soon.

After starting out 5-1 and falling to 5-4 in a hurry, Chicago Bears head coach Matt Nagy has come under fire by fans and media alike, with his play-calling and decision making being specific — and deserving — targets of criticism. While Nagy’s overall record is quite good (he’s 25-16), he has failed to accomplish the primary tasks he was assigned when Ryan Pace hired him: He was supposed to fix the Bears’ offense, and he was supposed to get the most out of quarterback Mitch Trubisky.

After going 12-4 and winning Coach of the Year in 2018, Nagy is 13-12 since, and he has been responsible for one of the league’s worst and most inept offenses, along with one of the NFL’s worst running games. Oh yeah, and he never figured out how to get the best out of Trubisky, who is now sitting on the bench as the team’s backup. While ESPN reported that Nagy will likely get at least one more year in Chicago, his seat is clearly getting hotter.

In his recent article for Outkick, Chicago sportswriter Greg Couch shared an interesting theory as to who would be the perfect successor to Nagy: current Michigan Wolverines head coach Jim Harbaugh. 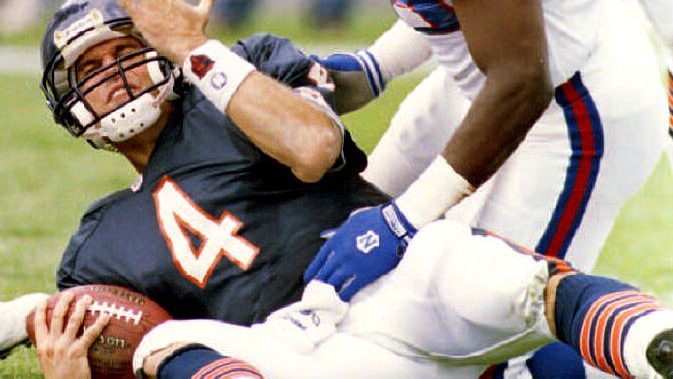 GettyThe Bears drafted Harbaugh in the first round in 1987. (Photo by EUGENE GARCIA / AFP) (Photo credit should read EUGENE GARCIA/AFP via Getty Images)

The Bears selected Harbaugh 25th overall in the first round of the 1987 NFL Draft, and he spent seven seasons playing quarterback in Chicago, six of which were under Mike Ditka. Couch notes that while Harbaugh hasn’t been the “rock star” many hoped he would be at Michigan, he may be a perfect fit in Chicago for a few reasons:

“The Bears need Jim Harbaugh as their head coach next year. He’s not the rock star coach anymore. People are dancing on his coaching grave now because Michigan not only can’t beat Ohio State, but they also lost to rebuilding Michigan State and now to Indiana … But he’s still the guy who took the San Francisco 49ers to the Super Bowl and those NFC Championship games. He’s still the guy who developed quarterbacks. Before that, he built nerdy Stanford into a tough success … He’s just 56 with a hell of a resume. Maybe Harbaugh is just better suited for the NFL than for major college football. But for an infusion of discipline, toughness and bravado, the Bears should take that chance. Not to mention that Harbaugh is a former Bears first-round draft choice and starting quarterback.”

Those who scoff at the idea of Harbaugh having success in Chicago because of his ties to the team shouldn’t be too dismissive — the only head coach to ever win a Super Bowl in the Windy City was Ditka, the former Bears tight end.

The Bears could also use an infusion of discipline, as they’re currently the most penalized team in the NFL. While Harbaugh’s 49ers were never among the league’s least-penalized teams, his teams never led the league in penalties, either, and he does bring a certain toughness Nagy lacks.

Harbaugh also had teams that were well-balanced in San Francisco. From 2011-2014, the 49ers ranked in the top five in total defense every year. They allowed an averaged of 17.4 points in those four seasons , with ex-Bears DC Vic Fangio serving the same role for Harbaugh at the time. The 49ers scored 23.3 points a game over his four seasons as head coach, and they were in the top five in rushing three of his four years there.

Harbaugh Has Had Success in NFL as Head Coach

Harbaugh was 44-19-1 in his four years as head coach of the San Francisco 49ers. He was the NFL’s Coach of the Year in 2011, his first year with the team. That year, he led the Niners to a 13-3 record, falling in overtime to the Giants in the NFC Championship. Harbaugh led San Francisco to the Super Bowl in the following year in 2012, handing Aaron Rodgers and the Packers an impressive defeat on the way. The 49ers lost the Super Bowl that year, 34–31, to his brother John and the Baltimore Ravens.

Harbaugh became the first NFL head coach to lead his team to three-straight trips to a conference championship in his first three seasons as a head coach when he took the 49ers to yet another NFC Championship in 2013, ultimately losing to Russell Wilson and the Seahawks.

Perhaps Couch’s best point as to why Harbaugh would work in Chicago is this: “Jim Harbaugh has a shelf life. He challenges you, pushes your buttons, makes you feel uncomfortable. He brings discipline and toughness. And he draws attention to himself shamelessly as a way of bringing bravado and togetherness to his teams.”

You know what else has a shelf life? This Bears team, particularly the defense. A guy like Harbaugh — who is more proven than Nagy — wouldn’t be the guy in Chicago for the next decade or two — but his energy, knowledge and history with the franchise make him an intriguing option to think about for a struggling team that’s in win-now mode.

The reality of the situation is that unless the Bears tank the rest of the season, Nagy and GM Ryan Pace will likely be back for one more year, skating by on a record buoyed by their 2018 campaign. But if Nagy loses the locker room this season, or the team finishes on a dreadful note, don’t be surprised if his seat turns molten in 2021 — if not sooner. And if that happens, the Bears could do far worse than Harbaugh.

Chicago is a tough town -- but then again, he already knows that.