According to a press release from the Department of Justice released on December 10, Bellamy was sentenced “to 37 months in federal prison for fraudulently obtaining over $1.2 million through a Paycheck Protection Program (PPP) loan guaranteed by the Small Business Administration (SBA) under the Coronavirus Aid, Relief, and Economic Security (CARES) Act.” 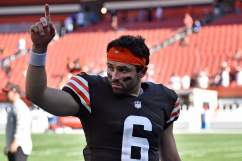 The ex-Bears wideout initially pleaded guilty to conspiracy to commit fraud in June of 2021 for receiving a $1.2 million loan from the Paycheck Protection Program for his company. He then took some of that loan money and purchased jewelry items, additionally spending some of the funds at the Seminole Hard Rock Hotel and Casino. He also brought others into his scheme, and was punished for that, too.

Bellamy entered the NFL as an undrafted free agent in 2012, spending his rookie season with the Kansas City Chiefs. He played for the Washington Football Team for a bit the following year before he landed in Chicago in 2014.

Bellamy didn’t exactly endear himself to Bears fans during his time in Chicago, as he earned a reputation for dropping passes in key moments:

My memories of Josh Bellamy pic.twitter.com/oM6VJRbTY7

Bellamy has admitted to the charges against him, which included giving a kickback to someone who assisted him with the PPP loan application.

Here’s what the press release from the Department of Justice said about why Bellamy was convicted, and wheat he did to earn a prison sentence:

According to court documents, Joshua J. Bellamy, 32, of St. Petersburg, Florida, a former NFL player, pleaded guilty on June 9 in the Southern District of Florida to conspiracy to commit wire fraud. As part of the fraud scheme, Bellamy obtained a PPP loan of $1,246,565 for his company, Drip Entertainment LLC, using falsified documents and false information. Bellamy admitted to using the PPP loan proceeds on personal items, such as jewelry, and a stay at the Seminole Hard Rock Hotel and Casino.

Bellamy also sought PPP loans on behalf of his family members and close associates. Bellamy further admitted that he paid more than $311,000 to an alleged co-conspirator, James Stote, as a kickback for his assistance in preparing and submitting the fraudulent loan application. In addition to his prison sentence, Bellamy was ordered to serve three years of supervised released and pay $1,246,565 in restitution and $1,246,565 in forfeiture.

Bellamy is going to have to pay back the near $1.2 million he borrowed with the PPP loan. He is currently free on bond, and is set to begin serving his 37-month sentence in February of 2022.