Khalil Mack is all about lending a helping hand to his teammates. In a hilarious moment from Sunday’s 17-13 win over the New York Giants, the Chicago Bears linebacker, who was mic’d up, was caught on camera giving fellow linebacker Robert Quinn instructions on how to do his famous sack celebration.

The Bears signed Quinn to a five-year, $70 million deal this spring with the hopes he would help free up Mack from the double and triple teams he was receiving last year with the now-departed Leonard Floyd on the other side. Quinn, who led the Dallas Cowboys in sacks last season, played his first game in a Bears uniform Week 2, and his impact was immediate. Luckily for Bears fans, many of his best moments were also captured on Mack’s microphone.

Khalil Mack Shows Robert Quinn How to Do His Famous Sack Celebration, Step By Step 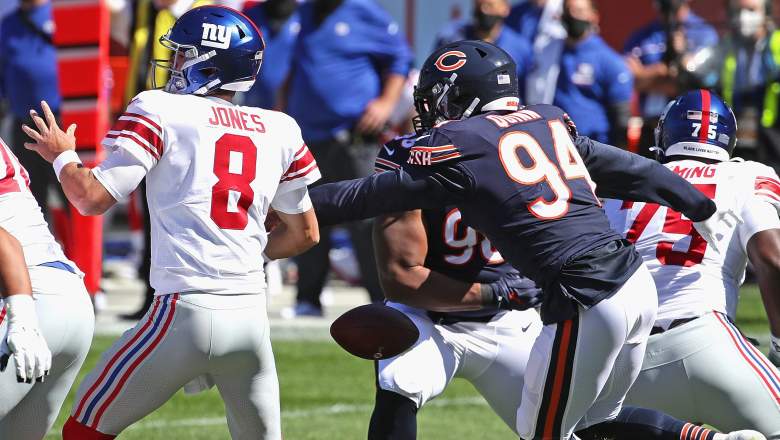 GettyRobert Quinn of the Chicago Bears strips the ball from QB Daniel Jones of the New York Giants at Soldier Field on September 20, 2020 in Chicago, Illinois. (Photo by Jonathan Daniel/Getty Images)

As the two linebackers were getting ready to head back into the game, cameras caught Quinn imitating Mack’s sack celebration on the sidelines. Mack also saw it, and he provided his new teammate with detailed instructions. “Yeah, yeah, yeah. Three pumps and two taps,” Mack said as he grabbed his helmet and entered the game alongside Quinn.

Khalil Mack busting out the LeBron celebration after the sack 😤😤 @FiftyDeuce @KingJames pic.twitter.com/OVM45nExwe

It was a fun and lighthearted moment, and it was a good sign after Quinn missed the first game of the season. The team has been ramping him up slowly, and while he saw limited action against the Giants Sunday, he has been off the injury report all week, and he should see his snaps increase as the weeks progress.

The sack celebration moment between Mack and Quinn can be witnessed in all its glory around the 4:34 mark on the video below.

Mack & Quinn Showed Tons of Promise in Just 1 Game Together

Go inside @FiftyDeuce's 🌎 on gameday… he rocked da 🎙 Week 2.

After recovering the fumble Quinn forced on his first snap as a Bear, Mack laughed almost maniacally as he ran down the field to congratulate him. “Hey, Rob! Rob! Here you go,” Mack shouted before handing Quinn the ball while giving him a smack on the back.

When the two sat together on the bench afterwards, Mack looked over at him, smiled, and said: “First snap?! First snap? It’s gonna be a fun day.”

“Thank you for the invite, man,” Quinn said in response, to which Mack replied: “Hey, it’s an open invitation. Let’s keep going.”

The Bears ended up with four sacks and two turnovers against the Giants, and if Quinn continues to heat up, this Bears defense may finally realize its potential.

READ NEXT: Bears Rookie Jaylon Johnson on Falcons’ WR: ‘He Bleeds the Same Way I Do’